This year has come with many exciting developments. Autumn Leaves has been published, and on a more private note, I became a permanent resident of ! I’d like to celebrate with you, and also mix in a bit of a tradition we observe in .


On December 6th, kids are eagerly awaiting St. Nikolaus who brings them candy and little gifts if they were nice. Usually, they put an empty boot by the door that is filled with goodies the next day--similar to Santa Claus and the stockings for which he was the model. Of course, we celebrate Christmas, too--as a child, I found this slightly confusing, as I was led to believe that there were two friendly men in red coats coming around during the holidays. The only difference in my imagination was that one of them would wear glasses. Since they both brought gifts and chocolate, I didn’t question these customs too much…


The real St. Nikolaus was a bishop who became known for using his wealth to help poor children. You can find more about his story here.


This December 6th, I’m giving away 2 pdf copies of Autumn Leaves, in order to celebrate the residency and other exciting news...but more about that next week.


To enter the giveaway, you have to leave a comment on the entry I’ll post on the day, and tell us a bit about your favorite holiday tradition.


I’ll see you next week, this time on Thursday! 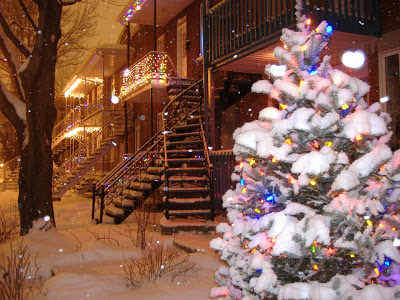 Posted by Barbara Winkes at 5:22 AM