Since you haven't heard from me in a while, I thought I'd give you a little peek into what I've been up to. With my wife and parents-in-law, we spent a week in NYC where it was hot and dusty and overall amazing. Part of the trip was inspiration and a bit of research, but mostly soaking up the energy. I'd never been drawn to New York that much, but now that I've been there, I gladly acknowledge the "I told you so"'s. We did the touristy things. We had a great time with friends we met. We went to the Stonewall Inn on our 4th wedding anniversary--and I really look forward to going back someday in the not so far future. 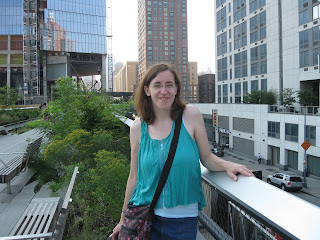 On the High Line, the first morning. We realized you can walk it all the way and back in a shorter time when we imagined, and there are all kinds of interesting things to discover along the way, and nice views.
And you can't help being curious about the person who has a rainbow flag and a Virgin Mary statuette on their balcony. I came back with more story ideas than I actually need, of which some have nothing to do with NYC. 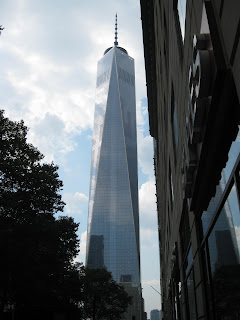 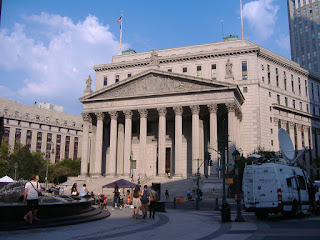 We spent the afternoon Downtown, taking in all
the sights, including the 9/11 memorial, a place that is definitely among the most chilling I've visited.

The next day, we had a visit at the UN, something else that leaves you with a lot to think about, many questions about the world in general and why we can't seem to get some things right.


The Supreme Court which we've seen a million times on Law & Order--of course I had to take a picture. You could easily imagine Olivia Benson walking on those stairs. However, the news vans you see were there for a different reason--Donald Trump had just been there a few hours before us. Let's say we were not sad we missed this, and move on... 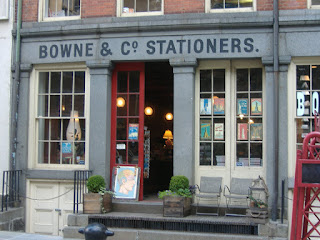 We are tourists, guests in other countries, and we don't mind that or pretend to be anything else. We like to go to these iconic places, take pictures, bring home a handful of souvenirs--but sometimes it's fun to walk off the beaten tourist path, step into a store and learn that it's the oldest in NYC with its original name, from 1775, Bowne & Co. Stationary. Lucky for us, they also had an exhibition in cooperation with the museum next door, and we were able to see some really old presses.


At night, we went back to doing what everyone does, browsing the stores and experiencing the craziness of Time Square at night, in full season. And the Metropolitan Museum the next day. What are the odds of running into an actress from home, who plays the main character in a show that's practically our version of Orange is the new Black? We didn't bother her, just risked one quick glance to make sure it was really her, and then went to a different wing.

We met friends of ours on Wednesday and Thursday, which is always a great reminder of how fandom makes the world a smaller and often, so much nicer place. 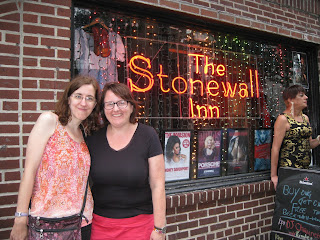 We haven't had Pride in Québec yet, but going to NYC, we couldn't pass off the chance to check out the Happy Hour at the Stonewall Inn, on the day of our wedding anniversary. We've come far. There's still a long way to go. 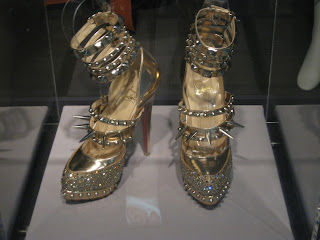 Friday, the last full day, we did some shopping, and I fell in love with a pair of heels at Macy's--which I didn't bring home. Sometimes it's just better to leave yourself wanting more. I can tell you though that they didn't look nearly as scary as these Louboutins that we saw in an exhibit at the Fashion Institute:

Like every time you visit one of those huge iconic cities, it's impossible to see and do all, but that's the great thing about travel--like with writing, you're never done. There's always more. And part of our "more" is likely to include NYC another time.
﻿
﻿

Now, however, it's time to go back to work and get ready for the fall/winter season. You'll see Jordan and Ellie again in Insinuations, and Amber Alert will be out this fall as well. The next one with Eternal Press after that will be...Summer Wine, #4 for Callie and Rebecca! Stay tuned for more, including some cover reveals and new Wednesday Women soon.

Posted by Barbara Winkes at 9:21 AM