Today in the Wednesday Women: K. D. Williamson tells us all about her leading ladies Kelli McCabe and Dr. Nora Whitmore from Blurred Lines, the first in the Cops and Docs series. Thanks for being my guest! 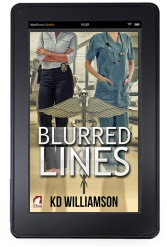 Blurred Lines, my newest work, was the easiest and the hardest thing I’ve ever written. There were times when I had to pull the words from the air and form them into something satisfying. There were  times when dialogue, scenes, characterization flowed like they were meant to be part of the physical world. Blurred Lines is a combination of both.
The characters sank their hooks in me. They whispered while I slept and had full discussions while I was trying to drive or work. No, I’m not crazy, but that’s how I usually know when I’m on to something big…something important…something great.
Kelli McCabe was the first to show herself. For her, family is always in the forefront, and being a homicide detective came in a close second. She is fierce, loyal, dependable, and crass. To round it all out nicely, she is also a huge ass. She can make you laugh one minute and the next you want to smack her. The funny thing? You’d come back for more because she cares, despite being rough around the edges. Her circle of people is small, but once you’ve found a way in, you are in.
She has the shoulders of Atlas and carries everyone else’s burdens as well as her own. She wears it all pretty well even when she has a hole in her chest. She is the best friend I never had, and the drinking buddy I crave. However, she has needs too, and it not until she meets Dr. Nora Whitmore that she realizes that it’s okay to open up and want something for herself.
Dr. Nora Whitmore lives in a world where everything is black and white. She’s cool, aloof and has worked most her life to keep everyone at arm’s length. It was easy to do with parents who lacked warmth and interest. Even as a teenager and after their deaths, she maintained the status quo that she had come to know. As a doctor, surgery is the epitome of her existence. It is the only mystery she loses herself in, and everything else goes into a neat little box. Her life is made even easier by a routine that never wavers. The world around her spins and rotates while she stays the same. She is an enigma, a beautiful puzzle that some shy away from and others want to crack. That’s difficult to do without a clue or a key.
Nora is a tough but fair teacher to her residents. She holds them all to an extremely high standard. Most of them hate her for it but respect her all the same. In short, everything is just the way she likes it.
Until she meets Kelli.
Kelli is a tornado that Nora never saw coming. She gets tossed about and Nora discovers that she likes the ride. She gets to experience parts of herself she didn’t know existed. The lines she’d drawn between her and actually living start to blur. Then, an even funnier thing happens. At the same time, Kelli finds that her edges become a little smoother.
I think you guys will like the end result.
Kelli and Nora’s story will continue in the second book in the Cops and Docs Series, Crossing Lines.

Posted by Barbara Winkes at 4:02 AM