We haven't had a Wednesday Women blog in a while, so I'm happy to present Dharma Kelleher who's joined by the protagonist of her debut novel "Iron Goddess," Shea Stevens. Congratulations on the release!

Now, let Dharma take you into the world of Shea Stevens... 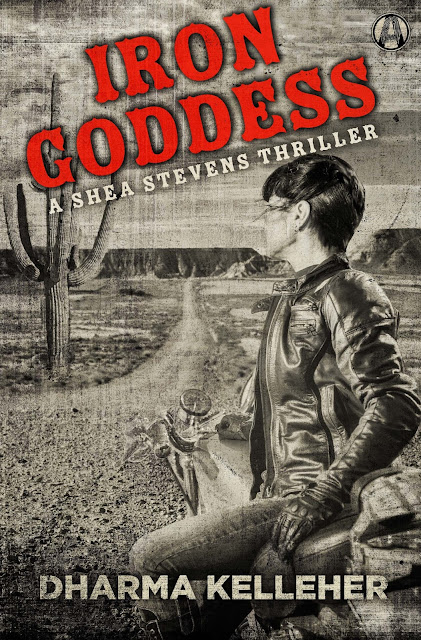 Going for the Grit

About ten years ago, I grew increasingly frustrated at the lack of diversity in the lesbian fiction I could find.

For starters, most lesfic novels were either coming out stories, romances, erotica, or cozy murder mysteries. But there’s so much more to being a lesbian than coming out, falling in love, having sex, and stumbling over dead bodies.

Where were all the adventure stories? The thrillers? The space operas? The urban fantasies? And why did the stories always center around the main character’s sexuality? Straight fiction didn’t do that.
And then there were the characters. Almost exclusively white, young, nubile, upper middle class women, like much of the cast of The L Word.

After a while it felt like a literary diet of mayonnaise sandwiches on Wonder bread. Where were the outsiders? The troublemakers? The misfits? The punks?
It was this hunger for diversity that propelled me to write.

Along the way, I became a biker myself and fell in love with the multi-faceted biker subculture. It really is a whole different world, full of conflict, drama and interesting, flawed characters. Heroes, villains, antiheroes, victims, and survivors, but none of them boring.

This is how I came up with Shea Stevens, the protagonist of my debut novel Iron Goddess. She’s an ex-con, lesbian biker who builds custom motorcycles for women. Not the kind of person you’d invite to your baby shower or gallery opening, and she probably wouldn’t come if asked.

She’s not young and pretty, but pushing forty with a roadmap of scars crisscrossing her face and fingernails permanently stained with engine grease. You wouldn’t want to date her because she’d never have time for you. Too busy either building bikes or getting in trouble, while trying to help others out of trouble.

She doesn’t always do the right thing or the smart thing, but when shit goes sideways, she’s the one you want on your side. She’s tougher than boot leather and go to any length to protect the people she cares about. She’s no angel. Just a badass survivor with zero tolerance for assholes, bigots, and bullies.

As the daughter of an outlaw biker, she grew up learning how to pick locks, hotwire cars, ride motorcycles, and shoot guns. All good fun until dear old Dad murdered her mama when Shea was fifteen.

After serving time in prison for boosting cars, she’s tried to live a clean life, running her motorcycle shop, Iron Goddess Custom Cycles, with her business partner Terrance and a crew full of ex-cons and recovering addicts.
But when someone steals three custom motorcycles and shoots an employee, Shea’s old instincts kick in. Rather than trust the cops, she opts to handle things herself. Doing so, however, leads her back into the violent, drug-fueled, cutthroat world she had tried so hard to leave behind. And this is where the rubber literally meets the road in a series of high speed chases, fierce gun battles, kidnappings, and bloody acts of revenge.

Iron Goddess isn’t a lesbian romance or even a cozy mystery. It’s an exciting, gritty, violent tale about renegades, outlaws, and misfits, set in Arizona’s rural high desert. Sort of Sons of Anarchy as seen through the eyes of The Girl with the Dragon Tattoo. I hope you’ll join me for this bumpy ride. Just hold on tight and wear a helmet. 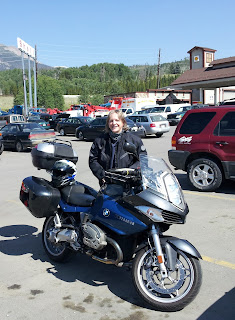 Dharma Kelleher writes gritty tales about outlaws, renegades, and misfits. Her hobbies include riding motorcycles, picking locks, and getting inked. 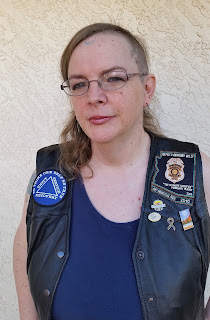 Her debut novel IRON GODDESS from Alibi (Penguin Random House) is now available from Amazon, Barnes & Noble, iBooks, Google Play, Kobo, and Books a Million.  Learn more about her and her writing at dharmakelleher.com.

Posted by Barbara Winkes at 3:44 PM