Daphne caught up with her on the sidewalk. Madina didn’t offer acceptance or rejection, so they walked in silence for a few minutes. She hoped Daphne wouldn’t ask her any questions. She was still winded from tonight’s events, and she had no news for her.
“I tried,” Daphne said. “Okay, I didn’t try very long, but I did, and it felt terrible. I don’t want to lose you. Whatever it takes to make it right, I will do it.”
“What have we gotten ourselves into?” Madina asked. She didn’t expect an answer either, and frankly, she knew the truth all to well. It wasn’t like all the ugliness had started to happen all of a sudden—it was only a matter how much of a privilege one had to ignore the status quo, or how close a look one dared. Once she’d done the latter, the result was disastrous. She wanted to help. She wanted to do her part to bring about change. They’d been doing this for a few weeks now, and Madina was tired beyond measure, from spells, from arguments, from the ever growing ignorance. She stopped in the middle of the road almost colliding with Daphne.
“Wait. I don’t think Morton is going to describe me in so much detail to the police. I could be wrong, but…He’s got something to lose as well.” Lulled into a comfortable relaxed state by the flight with Rafi, she had forgotten to mention this detail. “There was a half-naked man in his apartment.”
Daphne stared at her in disbelief, then she burst out laughing. “Wow, talk about…not a surprise. That little shit, crying about the gay menace threatening civilization itself with its agenda. You’re right. I think you’re safe. He wouldn’t want his party friends to know about that.”
“Yeah. He still called the police on me, so I guess it’s only fair that I have to go into exile for a couple of weeks.”
“I’ll be with you,” Daphne reminded her. “Kicking bad guy ass, it’s going to be fun. We do it better together.”
Despite the seriousness of the situation, Madina had to laugh too. “That sounds like a slogan for a superhero movie.”
“If the shoe fits…I’ll take it.”
Madina held her gaze, and all of a sudden she was equally thrilled and scared for the future and the challenges it would bring. They had gone into this with a somewhat cocky attitude, aware of all the advantages they brought to the fight—the enemy was far more numerous and dangerous than they had imagined, on so many levels. Maybe that was why no paranormals before them had tried to change the disastrous order of patriarchy.
They had each other though, and the present moment.
“What’s on your agenda tonight?” she asked, hopeful, breathless, worried she’d already done too much damage to their relationship by requesting a break.
“I don’t know. That kind of depends on you. Want to go over those files together?”
Madina was fairly sure that if she said yes, preparation for the trip wasn’t the only thing that was going to happen. She was going to see more ugliness, for sure, and for that, she needed to steel herself, know who was on her side and whom she could trust. Daphne would never hurt her, and she’d never take an innocent life.
“Why not? I’m sure Rafi will appreciate it when we’re better prepared the next time. Let’s do it.”
When they arrived at Madina’s apartment, there was no police surrounding the building which made her hopeful her theory could be right, and Morton would lay low after that first bout of anger. Would he understand, though, or would his policies be even worse, revenge? Tomorrow, she’d probably have the answer from the Elders, and with their backing, she could do a lot more, delegate, create bigger, far-reaching spells. Maybe she could even take some time off from work to research, and do more teaching. It would all come together.
They hadn’t been apart for that long, but when Daphne pulled up her shirt, her warm hands exploring Madina’s body, it seemed like forever. Maybe she was still experiencing after-effects from the flight, or the tropical cocktail she’d had at the bar, but the future didn’t look so bad anymore. Madina enjoyed the present as well. It didn’t take long until they were both naked, limbs entwined like neither of them wanted to let go, ever.
“I can make you fly too,” Daphne whispered.

If you enjoyed this teaser, you can check out the book here: smarturl.it/RiseBW 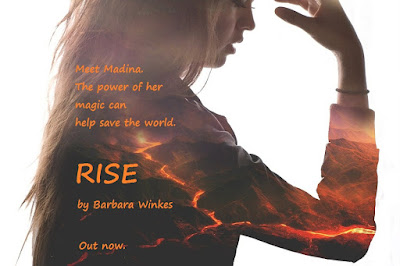