RISE. Escapism and Politics, and a sale.

Do they go together? Can we ever separate them?
As an author, I’m working on making a living. I tell the stories that mean something to me, and, fortunately my readers, about women fighting the odds…As a woman and lesbian, I believe all of those stories, not just mine, carry a clear political statement, and that’s a good thing.
We don’t have to go back in history—homophobia and misogyny are well and alive, and I’ve always believed that fiction can open people’s mind, move them, move all of us forward despite the ever predictable backlash. On the big screen (Katniss, Lisbeth, Wonder Woman), on the small screen (Supergirl, The Fosters, etc.) and with each of us individually.
I chose these days specifically to put RISE on sale, because I want to put it into the hands of as many readers as possible, for both selfish and unselfish reasons.
It’s about escapism. It’s about politics. Oh, and vampires and angels.
I think that’s a good recipe for fighting the odds.
Hope you enjoy reading about some badass females assisting human women in the revolution, and if you’re marching this weekend, stay safe.

RISE is $2.99 on Amazon.com until Sunday: smarturl.it/RiseBW 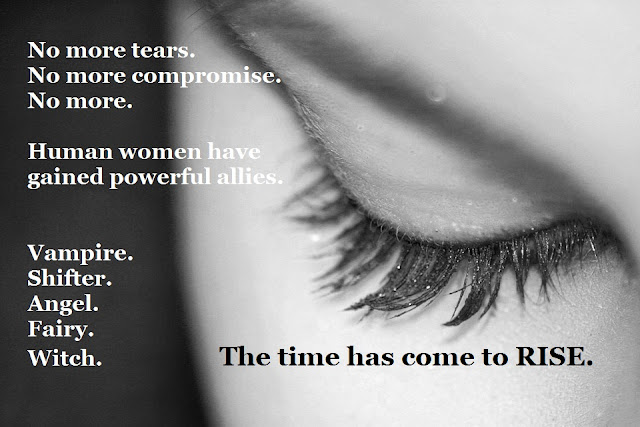 Sometimes it's easy for us to  give in to the pressure to market our books, sales and book-related blogs that the reason why we wrote a particular story can get lost in the messaging. Of course I hope you'll check it out, at the reduced price, at the original price, or in Kindle Unlimited/Prime.

Aside from the business aspect, I just love these characters. I imagine them in the kind of action movie that I hardly ever get to see, with women as the leads--women who work together towards a common goal, with all the rewards and complications that come with that.

It's fun, it's sexy, but there is more to it. In real life, there's always the danger to fall for the "divide and conquer" scheme from the other side. Even paranormal ladies have to consider this when they try to come up with what's the best way to get rid of patriarchy.

For a shifter and a vampire, vigilante justice isn't such a big deal. Angels, fairies and witches are not necessarily on board with that. How far will they go to teach humans, and is there a point where said humans would turn against them rather than join them?
Daphne, a vampire, and Madina, a witch, have maintained their relationship in spite of their peers subtle disapproval, but now they need the support of both Daphne's clan and Madina's coven, and not only that--they are trying to convince witches and vampires around the world to join the cause.
Cass, a shifter, is married to a human man, and she'd prefer for him not to find out about her true nature, but is that even possible when they are trying to change the ways of millennia?
Skylar is aware that her fairy skills and her contribution in the fight will be different from Cass's and Daphne's, and sometimes she's not sure they are of equal worth.
Rafi, the archangel, watches over her friends as they are trying to introduce a new paradigm to more or less willing humans, while not losing who they are at the same time.

So while there comes a moment when we think of sales and downloads and reviews, what comes first is the characters and their story.


PS: If you loved Madina and Daphne's love story, you can find a bit more about them in the short story Genesis, in the Spank or Treat 2016 anthology (there's no spanking in the story though, and there's only one other F/F story).

If you'd like to learn more about the characters first, you can do so on this blog, starting with Rafi http://barbarawinkes.blogspot.ca/2016/09/rise-rafi.html (you'll find the other links there).

Posted by Barbara Winkes at 8:50 AM