Today, Wendy Arthur joins me at the Wednesday Women table with her leading ladies Maiah and Eleanor. Welcome!

I hadn’t really thought about writing a novel before, but after the success of my online fan-fiction series (still ongoing), I decided that a different story might be a refreshing change of pace.

I wanted to write a book that would challenge perceptions and alleviate stereotypes, a story that would show the reader that love could be possible between two very different people from completely different backgrounds. That’s where Maiah Reyes and Eleanor Simpson come in.

Maiah was an abused child who made the decision to run away when she had the chance - Eleanor was doted upon and loved deeply. Maiah has no home and no money - Eleanor is a workaholic and is very well off.

With regards to her childhood, I wondered if Maiah would see her escape as a road to freedom where she could feel no more pain and make her own choices. I wanted to find out if she would ever come out of hiding when she finally saw someone who felt like a safe place for her. I also tried to explore how a stranger might see her, as the stereotypical wild woman who surely couldn’t speak or have any knowledge of the world. These are a few of the things I decided to challenge in the book, which is also a tale of love and mutual discovery for both leading ladies.

I did get a few reviews about how a child from the wilderness would react and cope as an adult brought back into civilization. They said my story was too far-fetched, or Maiah would have had so many more problems. Maiah did have issues, but perhaps another book is needed to expand on them as she begins to interact more with society. In my mind, it is a work of fiction that can be what I want it to be, and when I researched the few real-life instances of ‘wild children’, I could not find any records where the child was an intelligent, nine-year-old who chose to stay away from people for so long. Who knows how she would deal with reintegration?

So, I decided to write at least the first part of Maiah’s journey. The book cover was also a deliberate choice, as it was where her entire story began. 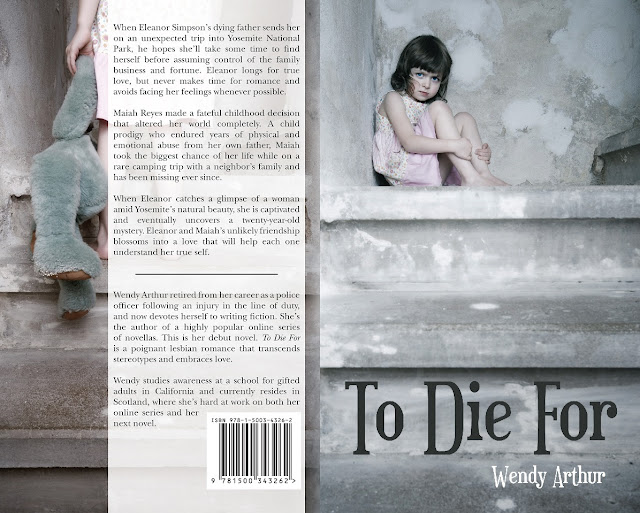 In the prologue of To Die For, there is a glimpse into the childhoods of Maiah and Eleanor. The stark contrast in both lives continues on throughout the book, including chapter one when Eleanor’s life as an adult has met, and quite possibly exceeded, her father’s expectations. When he finds out he is ill, he re-evaluates everything and realizes what he has done to his daughter. And even though it is nothing bad, she is still all business, working for him and living the life he lived. She knows nothing else. With that in mind, he sends her off on a wilderness camping trip with her friend in the hopes that she will ask herself what she truly wants in her heart. There, Eleanor catches sight of a woman on her last vacation day. She decides she has imagined it, but later on, she returns to the same place as she cannot shake her curiosity about the vision she saw, or the feeling it invoked.  She confirms that it was not a vision, and when Maiah reveals herself once more, an unlikely bond is tentatively formed. Life is about to change for both of them, bringing pain and happiness, fear and safety, and ultimately, self discovery.

I hope you will enjoy reading the book and challenging your perception of who you think Maiah is. All the ‘stereotypes’ are there, but they might not be what you expected.

Posted by Barbara Winkes at 7:10 PM