An introduction to Carpenter/Harding (excerpt)

Not, it's not time for the Friday blog yet...but  the7th Carpenter/Harding book came out not long ago, and I realized it's been a while since I've shared an excerpt from Indiscretions (book #1)--so why not?

This is the series I always wanted to write, and what would be my dream TV show. The inspiration for the first book came from watching too much HGTV House Hunters, an episode where a couple visited a house and found a trap door under a carpet. I wanted a fast-paced story with characters that face high stakes and difficult obstacles, danger and attraction...and along came Jordan Carpenter and Ellie Harding. 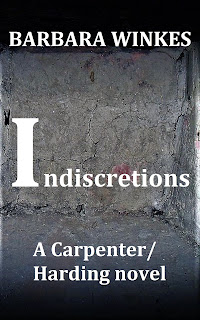 “He’s been lying to us from the start,” Ellie said when they were on their way to Gleason’s house. “I can see him going off the deep end over all of this. Maybe he started out wanting to punish his wife, but then got into the killing. Whatever. He’s in the hospital now, so he can hardly harm me or anyone else.”
Jordan let her ramble on before she undid Ellie’s argument. “Eleanor Campbell was killed long before Lori disappeared, and besides the M.O., there’s no connection between the two.”
Ellie groaned. “I’m so tired of this. Even Dr. Roberts thinks he’s the one, and isn’t she supposed to be the expert?” Not a good idea, she reflected, bringing up the third party between them. Jordan looked unhappy, her shoulders tense.
“I’ve been on this case since we found the first body. She hangs out with the PD in Seattle, learns some facts and doesn’t even tell me? I hate this bureau-cratic shit.”
If the situation hadn’t been this serious, Ellie might have congratulated her on the pun. As it was, she was trying hard not to overreact to what they had learned from Sheila.
“Either way, it’s shitty of a husband to get someone to kidnap and torture his wife,” she offered. “Even if they were—” She stopped herself short of saying “cheating”. Ellie didn’t think the reminder would be welcome. Speaking of which. “Can you come over tonight? You’ve had a rough day. I could cook you something.”
It wasn’t likely, but she had to try. First of all, once reality sank in that her attacker might have been a serial murderer on the prowl for his next victim, she’d freak. In that case, Ellie would rather be with someone. Second, the sex they had made her feel amazing. She wasn’t ready to give up on it yet. Certainly not for the sake of Bethany who was scornful and patronizing even after Jordan had survived a confrontation with an armed and dangerous man.
“I don’t know,” Jordan said. At least she was honest.
How can you stand her? Ellie wanted to ask. She held back the question, knowing her judgment was clouded by hormones, fear and something that was too early to determine. She was well aware she was walking a fine line. Her new no holds barred approach to life wasn’t supposed to come with heartbreak. “I understand you said you wanted to move out, but how are you still together?” It wasn’t diplomatic enough.
“You’re right, it’s been a rough day. I’d like to get this done and head home. There’ll be an officer in front of your house. If there ever was another guy, and I think it’s a possibility, he might be tempted to make an appearance.”
Ellie leaned back in her seat, trying to get a handle on her disappointment.
“We don’t know if he ever planned to come back for me.”
“That’s right. I don’t want to take that chance.”
“I’d feel safer though if you were with me,” she hazarded.
Jordan shook her head. “No way. We’ve crossed enough lines. Your safety is no joke.”
“Oh, so that other thing is, a joke? I feel so much better now.”
“Ellie.”
“You’re right. We’re at work. This is not the right time to discuss these things.” She avoided Jordan’s gaze, startled when, at the next red light, Jordan laid her hand over Ellie’s.
“Either way, I’ll clean up this mess,” she promised.
Ellie didn’t know what to say.

Intrigued? You can find all the Carpenter/Harding books and more at www.amazon.com/author/barbarawinkes

Indiscretions on The Lesbian Review.