"Nothing compares to seeing your work on that big silver screen for the first time" - Interview: Michele Mulkey

Most authors I know dream of having a movie made of their book someday. If you're actually considering it and need a Special Makeup artist, you should hire Michele Mulkey! I was lucky that Michele took some time out of her busy schedule to offer a glimpse behind the curtain.


I actually got interested in makeup while I was in college earning my Performing Arts/Theatre degree.  The first play we did was "Of Mice and Men" and there was only one female role, Curly's Wife.  Since physically, I looked liked I could have thrown the actor playing Curly through a wall, I obviously wasn't cast.  But the Director asked me to be the Stage manager and with that I had to so all the makeup and SFX for the fight scenes....And I was HOOKED!  I loved it!  And from that point on, I realized that makeup was my true passion.

I've enjoyed working on everything I've done.  Some of the highlights were Charmed and Firefly for sure.  I really enjoyed working on Petunia as well...It was simply such an amazing cast!
The one thing I have always wanted to do since the beginning of my career is create a realistic Sasquatch (Bigfoot) suit.  I've always been fascinated with the legend since I was a child and this year that dream is finally coming true.  I will be the Department Head for SFX and Creature Design on a new movie called Cryptids!  I was beyond excited when the writer, Jason Nunes, contacted me about the movie and of course I jumped on it!  I've already been working on some sculptures for the movie and every time I sit down in front of them I have a HUGE smile on my face....LOL!

I think that social networking is amazing because it puts you in contact with so many people, worldwide, that you would probably not have ever had a chance to connect with.  I've found that it's become a vital resource for growing my business.  It's allowed me to connect with individuals within the Entertainment Industry that might not have known about my FX Studio and on-line store otherwise.  I try to go onto at least once a day if my schedule allows it.  It's nice to be able to touch base with everyone, see what they're doing...Show them new things I'm doing.  It really has changed the world. 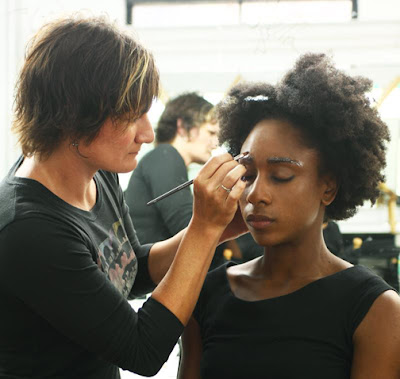 I'm up and in the FX Studio as early as I can be (usually 7am) and not leaving until late at night...LOL!  On average a 12 to 16 hour day, but I love it!  It might be long hours but the payoff is that I'm not sitting in front of a computer screen the whole time.  I'm making prosthetics or sculpting a disembowelment, so it's not work for me.
I draw my inspiration from just about everything I see.  It's everywhere if you just take a moment to stop and look.  The other day I saw someone with this really textured leather jacket on and I thought to myself "OMG...That would make an awesome alien skin!"

When I find the time to actually sit down and watch something I go for the crime dramas or supernatural/horror stuff.  Being a SFXMUA I'm always interested in Films and TV shows that have great SFX in them.  It gets me even more excited about what I'm working on when I see similar work on my screen.  Some of my favorite shows that are on TV right are Bones, NCIS, Rizzoli and Isles and The Walking Dead.

It was Solaris, starring George Clooney.  It was the very first major motion picture I had worked on and I will never forget it!  Nothing compares to seeing your work on that big silver screen for the first time.

First and foremost it would be Ve Neill.  She is truly my role model as far as makeup artists.  She is extremely talented and her work is simply amazing. And the fact that she has achieved her level of success in such a male dominated field is truly inspiring for an artist like myself.  Other role models have always been Rick Baker, Stan Winston, the legendary artists Jim Henson and Dick Smith, as well as many of the well known horror and sci-fi artists like Tom Savini, the KNB team - Howard Berger/Robert Kutzman/Gregory Nicotero, and of course Michael Westmore.

All the time!  I'm fascinated by the human face and I'm always looking at everyone who passes by.  Sometime I get some very strange looks back because they have no idea why I'm staring at them...LOL!

A lot of foams...Everything seems to be some kind of foam.  Two of the main materials that I use for my prosthetics are Foam Gelatin and Silicone.  There are a lot of different foams as well like Flex-It foam or one of the many Polyfoams available. Nothing in Hollywood is real...Ha!

Absolutely!  I'm currently the Dept. Head for SFX and Prosthetics on AD Lane's epic zombie movie Invasion of the Not Quite Dead (www.indywood.co.uk).  I'll be heading to England in March of 2013 for the filming, so right now I'm starting up with the pre-production on the film.  After that I have two other films coming up this year.  Cryptids will be shooting in the fall of 2013 and then I'm also working on the new ghost film written by Jonathan Chance called Something Like a Phenomenon (http://somethingphenomenon.wix.com/movie#!people/c22tz), which is based on a true story.  So it's going to be a very exciting year for the FX Studio!  In addition to that, I've recently set up the on-line FX Store to be available to SFX artist and film makers in the United Kingdom.  It's
our first international shipping, so it's exciting to be available in another country now.

Thank you for being my guest today!

Next week, I'll have for you a guest post from author and screenwriter RileyLaShea. Stay tuned!

Posted by Barbara Winkes at 5:13 AM