I grew up in a Lutheran household. I went to a Catholic elementary school which would sometimes take us to services, and, as a child, was fascinated with the different rituals and customs. Later, and especially after a brief foray into feminist theology in high school, I was appalled at the exclusion of women, and puzzled at the concept of celibacy. All of that happened before my own coming out and being confronted with any religion’s position on the LGBT community.
Fast forward, this Christmas, I went with my wife and her family to a traditional Reveillon, a midnight mass (okay: 11 p.m.) which not only brought back a bit of the early fascination, but sounded more hopeful than anything we’ve heard from a representative of the RCC in a long time. In Jesus’ message, no one is excluded. The priest specifically mentioned race and sexual orientation, which took us a bit by surprise.
Then again, this fits right in with the experience we’ve had since we decided to get married, and my immigration process began. Family or strangers, everyone has been great. I go back to our reception, the honeymoon getaway, or anyone we ever had to explain our situation to for matters of insurance or other official papers. The justice clerk at the courthouse was excited to perform her first wedding in English. The lady who welcomed us at the hotel didn’t blink an eye at two women booking a romantic getaway package. And when we tell our story, about how we met in Paris, some get a little jealous even.
It’s not hard to feel at home in an environment like this. We know we are privileged.
Given the prejudice and contempt that many around the world still face, not only from strangers, but their own family, this seems extraordinary--but it shouldn’t be. 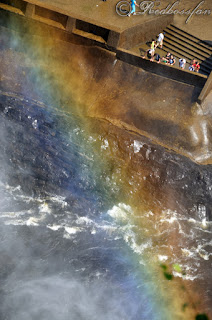 When you fall in love and decide to get married, you should be thinking of flowers and dresses and centerpieces, not whether you could commit a felony asking for a marriage license. We applaud the victories where bans are overturned and marriage equality is introduced, but it’s also sad and frustrating to think of how long some of those couples had to wait to have their commitment to each other recognized by the law. It is unnecessary and cruel to deny that to a large group of people based on--what, exactly? From a legal point of view, any “argument” against marriage equality crumbles quickly. The psychiatric community that used to let us down, badly, has long since stood up. We know today that prejudice and bullying make people sick--not being gay. We know that LGBT parents do well.
As for religion, my personal point of view--Jesus trumps Leviticus. It’s as easy as that. No one is excluded.
Yet, there will always be people who don’t want to see past their privilege and prejudice, no matter how many happy, healthy and sane LGBT families you parade in front of them. I want to believe that those are not in the majority. I want to believe that people can learn and change. In countries that embraced marriage equality, the sky didn’t fall. People welcomed a change to the better for all of society (a more equal at that), some grumbled, most moved on. Frankly, they have their own lives, hopes and dreams to think about.
It does get better.

Have a happy, healthy and successful 2014 and beyond!
Posted by Barbara Winkes at 10:32 AM