Here we are with JAE and her leading lady today! Not only you get to know Amy, but you also have the chance to enter the giveaway: Leave a comment to this entry, with your contact info, and you might be the lucky winner of an ebook of Hidden Truths or Backwards to Oregon. Sounds good? What are you waiting for?

Thanks JAE and Amy for being in the Wednesday Women spotlight today!

Next week, meet Andi Lea in this space!


This is an interview with Amy Hamilton from Hidden Truths, an award-winning historical fiction novel set in Boston and in Oregon in 1868.
Hidden Truths is a sequel to Backwards to Oregon. The revised and expanded edition of Hidden Truths will be published on or slightly before January 24.

“Luke” Hamilton has been living as a husband and father for the past seventeen years. No one but her wife, Nora, knows she is not the man she appears to be. They have raised their daughters to become honest and hard-working young women, but even with their loving foundation, Amy and Nattie are hiding their own secrets.
Just as Luke sets out on a dangerous trip to Fort Boise, a newcomer arrives on the ranch—Rika Aaldenberg, who traveled to Oregon as a mail-order bride, hiding that she’s not the woman in the letters.
When hidden truths are revealed, will their lives and their family fall apart or will love keep them together? 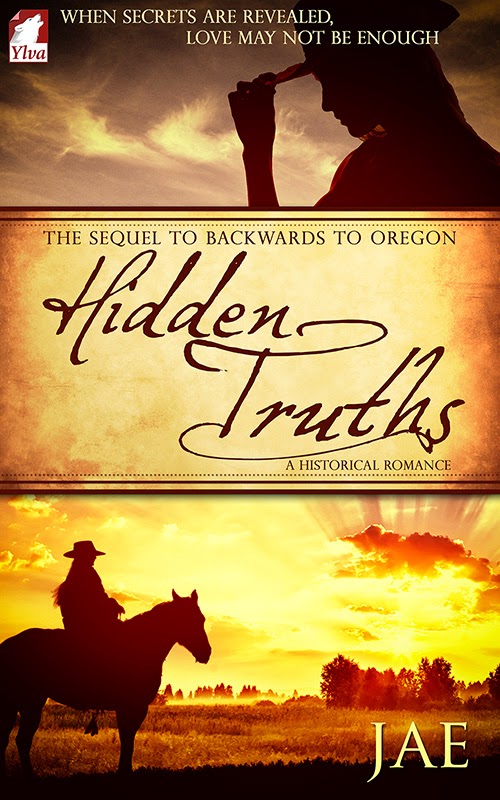 Can you tell us a bit about what kind of childhood you had? Where did you grow up?
Amy Hamilton: I don’t remember much about my early childhood, but I now know that I lived in a brothel in Independence, Missouri, until I was three. That’s where my mama met my papa. Oh, that sounds bad. I want everyone to know that she was always a perfect gentleman.
Later, I went west with Mama and Papa, traveling the Oregon Trail, and I have lived on our horse ranch a few miles south of Portland ever since.

Wait—did you just say “she” when you talked about your father?
Um, yes, I did. Sometimes it’s still hard to get my head around it, but my papa was actually born a girl. But only our family and two close friends know that, so please keep it to yourself or we might all be in trouble.

So like your parents, you are a woman loving another woman. How did you first meet Hendrika?
I first met her when she came to Oregon to marry Phin, our foreman. He advertised for a mail-order bride in one of the fancy papers back east, and Rika answered his ad—or at least we thought so at the time.

What did you think about Rika when you first met her? Was it love at first sight?
Oh, Lord, no. I was more focused on a horse I had just rescued, so I didn’t pay her much attention. I thought she was rather plain-looking. Now I can’t believe I could ever think something like that. Rika has the sweetest smile and the most charming Dutch accent, and when she looks at me, I could lose myself in her dark eyes.

Has Rika ever told you what she thought about you when you first met?
I reckon she wasn’t very impressed with me either. On my way to the stage depot to pick up Rika, I came across a few men who tried to break a mare, so I set out to help the poor animal by gentling her. By the time the stagecoach arrived, my dress was mud-spattered and ripped up to mid-thigh, revealing my drawers, and my bonnet was hanging off to one side. My hair must have looked as if a flock of birds had tried to nest in it.

Sounds as if you lead an interesting life. What's the scariest situation you've been in?
That’s hard. Lately, there were so many scary situations. If I had to pick one, it would probably be the time when Rika and I had to save the foal from the flooding river. Or maybe when we headed into a burning barn. Oh, wait, now I know. The scariest moment in my life must have been when I went after Rika and stopped the stagecoach she was in to tell her that I like her as more than a friend.

If you could change one thing about yourself, what would it be?
If you had asked me that a year or two ago, I would have said my unnatural feelings toward women. But I’ve come to believe that there’s nothing unnatural about loving a woman as wonderful as Rika. The only thing I’d love to change about myself is my height. I’d like to be taller, like Papa and my sister, Nattie.

Is there anything else you’d like to tell us? Any secrets to share?
For the time being, I have enough of secrets being revealed, so if you want to find out more about me and my family, you’ll have to read the book, Hidden Truths.

Posted by Barbara Winkes at 3:57 AM