I've been intrigued by award-winning author Cindy Rizzo's Love Is Enough from the moment I first saw the cover, and it's on my ever-growing TBR list. Politics, money and love in a lesbian romance? What's not to be intrigued? So today, we talk about Angie Antonelli and Jan Clifford. Thank you so much for joining the Wednesday Women! 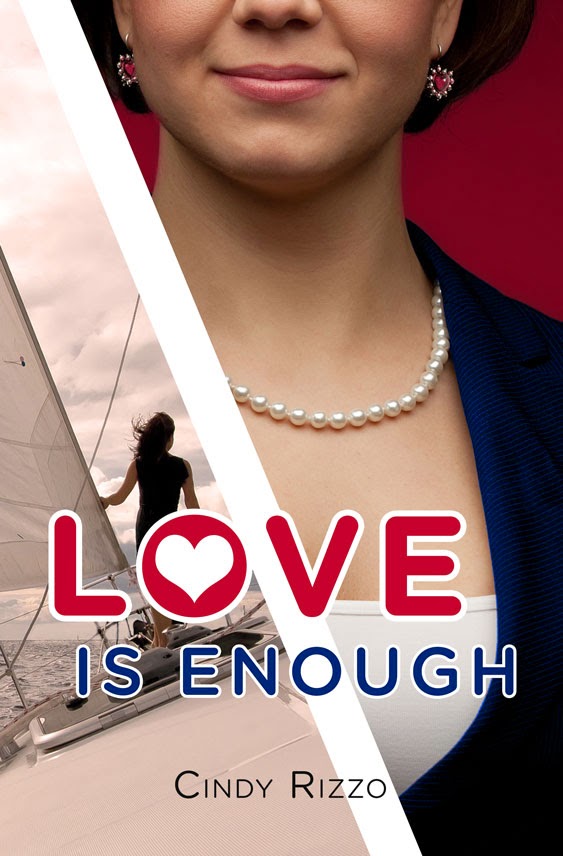 Cindy: I thought I’d introduce Angie Antonelli by talking a bit about the arc of her story. What I mean…

Robin Greene: Excuse me, but I’m already half asleep. You’re going to talk about my best friend and you start out with the most boring (not to mention pompous) idea of describing her so-called arc. Look, I’m a writer too and I’d never talk about my characters that way. Have a little respect. This is a member of Congress you’re writing about. Who knows, she could be President one day. I wouldn’t put it past her.

Cindy: Well then, what’s your fabulous idea about how to describe Angie, oh great and powerful writer?

Fine, I’ll save you from yourself and rescue poor Barbara Winkes from having to post a snooze-fest on her blog.

Angie is one of the best people in the world. I know that’s a lot to say, but I can’t help it, it’s true. She really cares about all that stuff she talks about—the ability of politics to bring about change, the need to rescue small businesses, the right of all people to not have their vote taken away. I mean, as they said during her campaign, she’s The Real Deal. I should know. Not only is she my best friend, I also write a lot of her speeches (another situation where I rescue someone from having to inflict boring prose onto the world).

You know, Angie was groomed for political office by her family, probably since she was in the womb. Her dad was the mayor of their town and she has a million relatives who’ve been elected to stuff. But really, the main force behind it all is her mother, Jeannette. I could write a whole blog post on her, and never use the word "arc" once!

So Angie’s had a lot of success. She wins every office she goes for by convincing people she cares about them (and she really does) and by using her lexicon of smiles. That woman has a different smile for every occasion and they are all just magnetic. How do you think Jan Clifford got reeled in?

I mean, Angie’s love life had been in the doldrums before she met Jan. She’d never gotten over being dumped our senior year of college by that awful Nicky Ford, the quintessential Poor Little Rich Girl. Ugh. If you ask me, Angie dodged a bullet when that relationship ended. But she didn’t see it that way. She went into a tailspin that lasted forever. After that, she got involved with loser after loser, until she met Jan Clifford. Yes, another rich jock (Angie has an unfortunate type) but a really, really good person. Jan Clifford even passed The Galileo Test (it’s worth the price of Rizzo’s book alone to find out what that is)! But then Angie got trapped in the ladies room at that event at Princeton she went to with Jan, having to listen to three mean girls say she was nothing compared to Jan’s ex. Oh, and then the thing happened with Angie’s re-election and what seemed like a sure thing no longer was.

Robin: What? Oh, am I at the 500-word limit already? All right. I’ll just stop here and end by saying that everyone who meets Angie can’t help but be charmed. Read that cute little romance called Love Is Enough, and you’ll see why.

Love Is Enough:
Angie Antonelli has the life she’s always wanted—a promising political career, a supportive family, and great friends. The one thing missing is what she hoped she’d have by now, a committed relationship with the woman of her dreams.


Jan Clifford has been taking a break from dating while she figures out how to create a life that is more fulfilling than the country club society of her parents and her job in the family’s investment firm.


When Angie and Jan are set up on a blind date to go sailing, the chemistry is immediate and the attraction undeniable, but each wonders if she can really fit into the other’s world. Can the politician who fights for the little guy make things work with the financier who was born with a silver spoon in her mouth?


Before it has time to get very far, this new relationship is put to the test. First, Angie must decide how she really feels when the woman who broke her heart many years ago suddenly comes back into her life. And then the worlds of politics and finance collide when Jan refuses to walk away from a business deal that threatens Angie’s re-election to a second term in Congress.

Can the intense connection they feel keep Angie and Jan together? Only hopeless romantics believe that love is enough. Or is it?

From the author of the award-winning debut novel, Exception to the Rule, Cindy Rizzo once again delivers a riveting story that blends romance with the important issues of our time.


About Cindy:
Cindy Rizzo’s first novel, Exception to the Rule, won the 2014 award for Best Debut Fiction from Golden Crown Literary Society.  Her short story, The Miracle of the Lights, will be published in the upcoming anthology Unwrap These Presents (Ylva Publishing).  Earlier writing includes essays in the anthologies, Lesbians Raising Sons and Homefronts: Controversies in Non-Traditional Parenting.  Cindy was also the co-editor of a fiction anthology, All the Ways Home, published in 1995 (New Victoria) in which her story Herring Cove was included.


Cindy has worked in philanthropy for many years and has a long history of involvement in the LGBT community.  She serves on the boards of Congregation Beit Simchat Torah in New York and Funders for LGBTQ Issues.   She lives in New York City with her wife, Jennifer, and their two cats.  They have two grown sons, a wonderful daughter-in-law, and a baby granddaughter.