This week in the Wednesday Women, Sara Denning and Emily Wyatt from Anne A. Wilson's debut novel Hover. Thank you for visiting and giving us a glimpse into the world of these compelling characters! 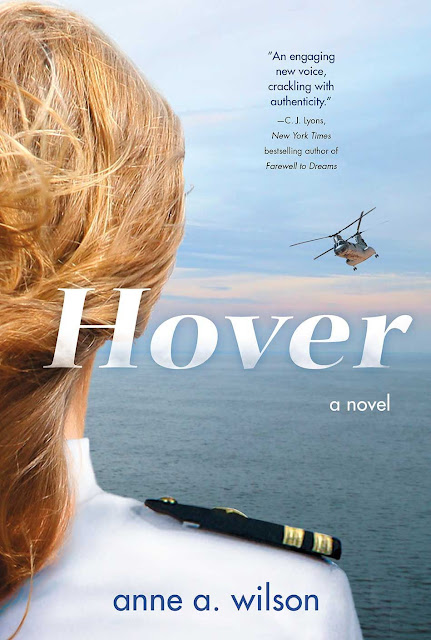 
Thank you, Barbara for hosting me on your blog, and for allowing me to introduce the main protagonist in my debut novel HOVER. Her name is Sara Denning and she’s a  helicopter pilot in the U. S. Navy. A lot of what you learn about Sara comes through her interactions with her roommate, Emily Wyatt, a fellow helicopter pilot.


Sara and Emily are on an eight-month Western Pacific deployment—members of an air detachment comprising two helicopters and thirty personnel—aboard the USS Kansas City. They are also the only two women on the ship in a crew of 500.


They are competent naval officers and pilots, yes, but these two women couldn’t be more different. I think the best way to introduce you to Sara is to give you an excerpt from HOVER, showing the back-and-forth banter between the two.


In this scene, Sara and Emily are getting ready for bed in their stateroom aboard the ship.

I slip into my pajamas—an oversized Minnesota Vikings football jersey—and stuff my dirty laundry into the net bag that hangs at the end of our bunk.


Em changes, too. As always, it takes me a second to adjust to the sight of her in a long pink nightgown complete with lace around the collar. There’s just so much . . . pink. Except for the socks. Those are fuzzy and purple.


She unwinds the braid that keeps her long auburn hair neat and tidy while in uniform and shakes it free, then grabs a book from her personal library that she’ll fall asleep reading—one of hundreds of Harlequin romances she has brought along with her.


It doesn’t compute with me. It has never computed. In fact, I can’t reconcile it at all.


“Em, how many of those books did you bring with you this time?”


“Oh, fuck, I don’t know. Eighty? Ninety? I didn’t want to run out. But I can already see these are only going to last until midway through cruise, if I’m lucky. Why? Tempted to read one?”


“You know, I think this is one of your problems, Sara Denning. You can’t even chill long enough to read a romance novel.”


“Allowing yourself to escape to a place that connects with your inner femininity is important to your well-being. You’re gonna lose yourself otherwise.”


“What? I’m not losing myself. I don’t need to read that stuff to remind me that I’m feminine.”


“They all have happy endings, you know. A guaranteed, you’re-gonna-feel-good-at-the-end perk.”


“I don’t need a Harlequin romance to make me feel good.”


“And not just that, you need . . . well, you need to put away your systems manuals and let go of yourself.”


“I’m not having this conversation,” I say.


“Fine,” Em says, fluffing up her pillows before scooching under the covers. “I’m transporting myself to a happy place now. Goodbye.”


Climbing into my rack, I flip the switch for the tiny light above my bunk. As it flickers and yawns to life, I cross my arms behind my head, fixing my gaze on the miscellaneous ducting and wiring snaking across the overhead. The ship vibrates, hums, churns, and whines, but not loudly enough to block the sustained ringing from Emily’s comments.


Allowing yourself to escape to a place that connects with your inner femininity is important to your well-being.


Not my well-being. I can’t succeed in this world and maintain that connection. It started the day I entered the Naval Academy, when I began a journey I had never intended, stepping onto a career path carved for someone else. To survive, the walls went up. And to get to where I am now, they stayed up.


I shift my focus to my stack of journals. If I did need an escape, I certainly wouldn’t find it here. The pages don’t contain a lot of pleasant thoughts. But then, that’s silly. Why do I need an escape? I don’t need that.

As you can see, Sara is a no-nonsense person, studious, serious, and closed off. The reader doesn’t know it yet at this point in the book, but Emily is actually the more balanced of the two. At its core, HOVER is Sara’s story. It follows her journey as she opens up and becomes a more well-rounded woman, one who embraces all sides of herself.

Anne A. Wilson graduated from the United States Naval Academy and served nine years active duty as a navy helicopter pilot, which included deployment to the Persian Gulf. The Naval Helicopter Association named Anne and her crew Helicopter Aircrew of the Year, an award given for search and rescue. She lives in Fountain Hills, Arizona, with her husband and two sons. Hover is her debut novel. (Forge Books, June 2015)
Posted by Barbara Winkes at 5:08 AM