Sonnet O'Dell was one of the first contributors to the Wednesday Women, with her heroine Cassandra Farbanks. Now she's introducing her new leading lady Cera Raine. Thanks for the visit! 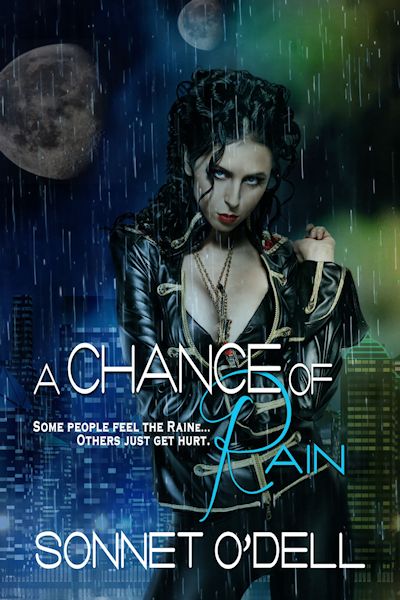 Cera Raine was born into a life of privilege, a rich and exciting world of money, parties and aristocracy. She was incredibly intelligent and beautiful, the perfect daughter, so no one understands why her father would throw her out at 16 or why just a few years later she would be accused and convicted of his murder. She used her intelligence to survive, just on the wrong side of the law, enough that it makes her interesting to the police as a potential informant and operative. She knows the walk, can talk the talk and can get away with it.

The first book is called A Chance of Rain. In it we follow Cera who agrees to work for the police to get out of prison but her job doesn’t come without certain conditions – one of which being that she wear a bomb around her neck, so that she can be taken out should she try to run. The case she is working on, is to find who is selling a new narcotic substance called Reality, a drug that transports the user to a hallucinogenic dream like state. Cera is smart and calculating but also charming and sexually provocative. She often flirts to get her way or disarm her opponents. She has connections but legal and not, and very complicated relationship with Sebastian Raine, her brother.

Cera is immensely fun to write. I like having a character who says what she wants and gets away with it because she says it with a smile and a saucy wink. I like the world in which she lives, a human colonised solar system in a not too distant future. Under all the easy going attitude and cheekiness, there is a serious and conflicted woman who has a lot of questions and secrets in her past. They do say those that smile the brightest are often the loneliest.

A Chance of Rain and Cera, are my first self-published work. I’m working on the next book in the series, I am aiming for a trilogy. It’s a different sort of story from my normal works and I am hoping that it will be as well liked as my paranormal works.