In order to celebrate the re-release of the thriller Secrets and the romance The Interpretation of Love and the Truth, here are two excerpts (you can now read these books for free in Kindle Unlimited). 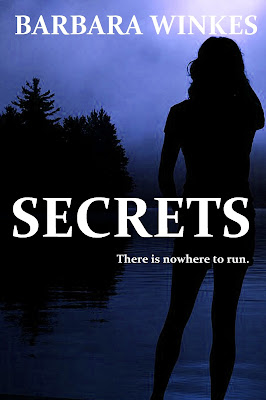 
In the current state of bliss, Marsha was startled to see the knife on the nightstand, until she remembered what Jessie had said earlier about giving it back. Underneath, there was a piece of paper with an address and a phone number written on it. Marsha frowned. They were both living in Port Orchard after all. She couldn’t imagine how long Jessie had walked to end up in the same place as Marsha did—the small diner off the road. Had she caught a ride with someone else before?
“I suppose that now, I can go back to my apartment without panicking every time the phone rings. You could come over to dinner…”
Marsha turned to Jessie who was standing in the doorway, watching her.
“I’d love to. Thank you for that, mystery woman. I knew that patience would pay off.”
“Oh, I know it did for me. In every possible way.” It was hard not to smile when meeting with blatant flattery. Sandy had once told her that she made up for her lack of experience with enthusiasm. Good to have a second opinion on that.
Jessie sat down on the side of the bed.
“Your Dad, did he go hunting sometimes, take you to places like this?”
“No.” Marsha picked up the knife, regarding it from all sides. She’d once opened a package in the car and just left the knife there. “He was more of a collector. Couldn’t kill a fly, as they say, let alone anything cute and furry.”
Jessie took it from her and got up. Taking aim, she threw it across the room where the tip embedded itself in the door frame.
Marsha stared in disbelief.
“Any more hidden talents of yours that I should be aware of?”
Jessie shrugged. “It’s always good to be prepared, don’t you think? I’ve been working on that. You got hurt because of me today. I don’t want that to happen, ever again.”
“You learned that stunt when today?”
She couldn’t help it, a bit of the old distrust making its way into her words. Marsha hated it. For a woman like Jessie who had been living with a threat for a long time, it wasn’t unusual to take measures. Marsha knew firsthand how little the police could do in these cases. Entitled jackasses often thought that restraining orders didn’t apply to them.
“I’m sorry,” she said softly. “I mean it.” After all, she wished the other woman, that other time had “taken measures.” Marsha didn’t blame her for not doing it, but she would have liked the man who had killed her to feel a little more pain than just serving his time and maybe brushing up his résumé while on the inside.
“I know.”
Jessie scooted closer to her, curling up on her lap.
“I know you’re trying hard. It doesn’t always work out.”
“No,” Marsha agreed, brushing her hand softly over Jessie’s hair.
“I could fall in love with you. Easily.”
The non sequitur caught Marsha off guard. Even months into their relationship, Sandy had done her best to avoid the subject.
“Just like that?”
“Just like that,” Jessie confirmed. “Don’t worry though. If you agree to that dinner sometime, I can be patient.” 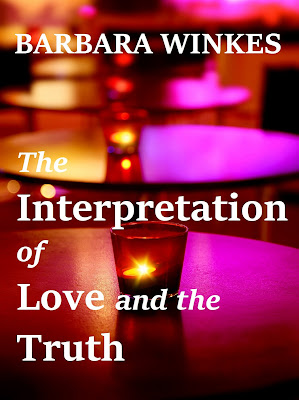 smarturl.it/InterpretationTruth
Chelsea and Gail are engaged to get married. Their relationship is safe, comfortable, and without conflict. According to Tonya Gray, it also lacks the passion one should feel for the person you commit to for the rest of your life. Chelsea might not trust her because Tonya broke her heart three years ago. As the date nears, Chelsea has to figure out if love means what she has with her fiancée, or what she could have with the woman she couldn't forget.


Tonya—no surprise there—entered the place like she owned it. Her eyes widened briefly when she saw Chelsea. Of course, she was dressed in her usual button down shirt and jeans, looking gorgeous. The heels of her boots clicked on the tiled floor.
“Hi,” she said, leaning in to kiss Chelsea on the cheek. “I hope you didn’t have to wait too long?” She didn’t mention Chelsea’s appearance at all, but appraised her silently. No reason to blush. The air conditioning blasted away at full force, damn it.
“Well, at least you showed up this time.” Chelsea couldn’t help it. She shouldn’t feel or act like a teenager, but she sure had back then, stood up by her crush. On purpose or not, Tonya still made her feel that way. “So how’s work going?” she asked in attempt to make this encounter look less like a date that could go wrong any second.
“Great.” Tonya took a seat beside her, ordering a latte with a double caramel shot when the waitress came by. “Would you like to share a piece of cake? The chocolate chili cream cheese is to die for, but too much for one person.”
Right, there was nothing much vanilla about Tonya. Chelsea wasn’t too sure about the chili though. It was already pretty hot in here. Maybe she was developing a fever?
“Okay, we’ll take one.” The waitress went on her way, and Tonya resumed the earlier topic. “It can be a depressing place, no matter how bright the paint color of the walls, but I like doing this work. At the very least, it gives the women something else to think about for a few minutes, and if they feel a little better about themselves and their bodies, even better.”
“I’d prefer if we taught men, and some women, not to be jerks,” Chelsea countered. “I know what you do matters, but it doesn’t get to the root of the problem.”
“Maybe, but this is what I am able to offer. I believe it counts in the bigger picture. Your work, Gail’s, all of it intersects. At least we try to keep the jerks at bay until we figure out what to do next.”
By the time Chelsea realized she was smiling, it was already too late.
“I have girls’ classes now too. For that, I make the parents pay though. Would you like to visit sometime?”
“Sure. For what it’s worth, I think what you’re doing is great.”
“Growing up?” Tonya asked, amused.
“I wasn’t saying that.”
“Starting a business is great, and it’s frightening, especially when it’s not just you depending on it working out. I love a challenge.”
“Is that what I am to you? A challenge?” Now that the question was out in the open, Chelsea found herself unable to stop. “What if, for a moment, I was crazy enough to go along with all of this—if I was curious about all that great sex you’re promising? What comes after that?”
The waitress brought their orders, and for a moment Chelsea was worried she could have overheard her words.  If she had, she didn’t care.
Tonya pushed the plate towards her.
“Try.” She went back to the more pressing question when the waitress was out of earshot. “It’s much more than that, but since you’re asking, I would want you to come live with me for a week, take your time to make up your mind, and go from there. I would have taken you to Boston or New York to get married but as it is, we could just go to the courthouse. Not that I want you to think I’m cheap. We could go to New York on our honeymoon.”
“Now that is just cruel.”
“Is it?”
“Besides, one week seems a bit rushed,” Chelsea said, trying not to imagine how two people attracted to each other could spend one week. None of this was at all realistic.
“It’s enough. Besides, you needed less than that to decide in the first place. I was the one who screwed up, remember?”
Chelsea shifted on her chair, awkwardly pressing her legs together. Hell, yes, she did remember…all of it.
“I won’t run out on you again. Ever.”

Posted by Barbara Winkes at 8:48 AM