Only ten days! To continue the countdown to the release of RISE, here's an excerpt: 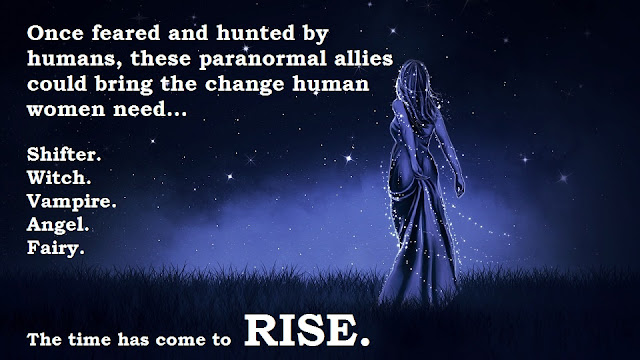 “What did I miss?” Madina blurted out as she rushed into the back room of the bar where Daphne was tending to a pissed off Cass, removing a bloody bandage from her shoulder. The piece of cloth was soaked, but there was only a gash marring the shifter’s skin, closing already, which told Madina the incident had happened a few hours ago.
“The usual human BS,” Daphne told her. If she sounded tired, it wasn’t actually physical, more her weary-of-the-world and fed-up-with-humans mood. Instinctively, Madina took a step backwards, feeling a pang of guilt she could never entirely rid herself of whenever this subject came up. Somewhere in her bloodline, on her father’s side, there was human in her ancestry, not always a reason to be proud. Not all humans were kind.
“Where’s Rafi?” she asked quietly.
“With the woman. She’ll be okay.”
“Me too, thanks for asking,” Cass piped up. She was wearing an over-sized shirt and nothing else, no opportunity to get into clothes after shifting, Madina assumed. Not that Cass was overly fond of clothes in that state, she knew.
“You’re okay? Really?”
“Fucker shot her.”
Sometimes, Daphne’s choice of language made her flinch too, but there was little taboo for a vampire of almost seven-hundred years. Madina blushed, glad no one cared, because everyone was aware. The dim light wouldn’t save her in a room full of paranormal beings.
“What happened?”
“The usual. Assholes decided she shouldn’t say no to him, followed her into an alley with his friend. We made it on time. This time.”
Madina didn’t need to ask any more questions. They were all aware of how often there was no one to step in, human or any other kind. There was something she wanted to know though.
“Are they alive? I could come up with some spell,” she offered. “It’s not much, but…”
“Yeah, that would help,” Daphne said, her voice less gruff, warm and affectionate instead as she addressed Madina. “Thanks.”
“No problem. So…what’s going to happen now?”
The vampire and the shifter exchanged a meaningful look, and Madina had a hard time not to feel left out. She shouldn’t, but sometimes she couldn’t help it.
“We wait for Rafi,” Cass said. “Then we talk.”
“Sit down. Have a drink,” Daphne suggested. “I’ll make sure you get home safely,” she added with a wink, and Madina smiled, relieved.
They had found something special in their circle, a connection that went beyond even what they had within their own species. She was often worried that with every human screw-up, they might remember her own heritage, but Rafi, Cass and Daphne had been around for long enough to know Madina’s ancestors weren’t the enemy. Neither were all humans, but the ones who clung to a way of life that had wreaked havoc on their kind for many generations.
Her gaze fell on the half-empty bottle of vodka on the table.
“Sure, why not?”
Daphne sneezed, rolling her eyes, not at Madina but her own predictable reaction before the door opened.
“I read your email, Daphne.” Skylar entered the room with a nervous fluttering of wings. “This doesn’t sound good.”
“It’s not...good.” Daphne sneezed again, holding up a hand. “Gee, can’t you leave that damn pixie dust at home?”
Skylar looked offended. “I thought Madina might be running out soon, so…”
“TMI,” Daphne interrupted her. “I’m not exactly sure what kind of spell she does with it, and I don’t think I want to know.” Madina blushed some more. Pixie dust helped changing children’s nightmares into something more pleasant. It also worked on adults in a slightly different way.
“Sit,” Daphne said to Skylar. “We need to talk.”
“I’d say so.” Rafi, in her more casual humanoid state, had joined them, and all jokes about pixie dust or vampires being allergic against it were off the table.
“Ladies, we all know what the problem is. The question is, do we make it ours, and if that’s the case, where the hell do we start?”

Curious? You can pre-order RISE on Amazon. And check out the Author Takeover for a chance to win this necklace. All you have to do to enter is click "join." Hope to see you there! 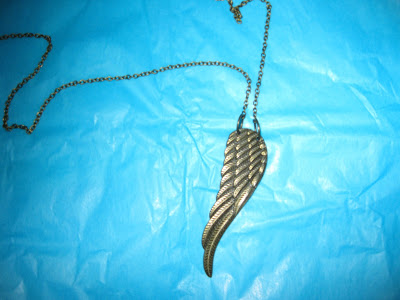 Posted by Barbara Winkes at 1:58 PM