The title of the new Carpenter/Harding novel is Intentions. #6 in the series about Detective Jordan Carpenter and Officer Ellie Harding (starts with Indiscretions) will be released November 9th, and is now available for pre-order.
I love writing these characters, and am happy whenever I hear from readers who have followed their story from the beginning. Jordan and Ellie are pretty much at the center of my writing these days, art, business, and those characters in particular, also a bit of an indulgence. 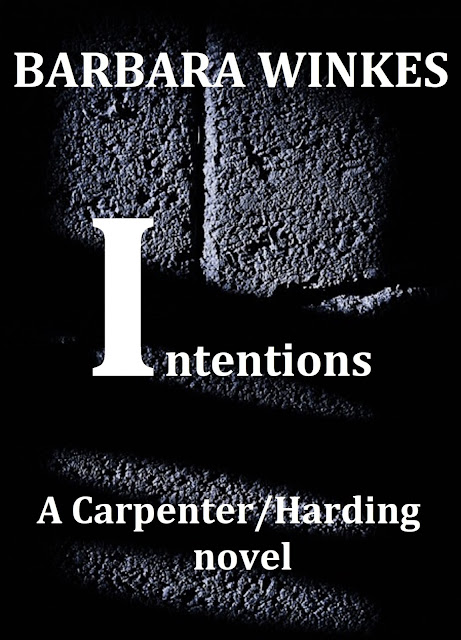 First of all, I always wanted to have MY series, crime, suspense, lesbian main characters. For me, being able to continue to write those two, is a dream come true. Especially since I know that mainstream books/TV is not going to give me that, maybe not ever. There are still too many gatekeepers in place that keep things straight, so to speak.

I gravitate towards crime dramas that have at least one or two women in the main cast (you know the ones). We all know what happens to lesbian characters on TV, most of the time: If they don't get killed, we rarely see them, let alone the girlfriend. I indulged myself sitting down and writing exactly what I would like to see, two women in a relationship trying to navigate their lives together in this particular setting and genre. I think you can tell who some of my favorite books are as well, mainstream and lesbian (though I strongly dislike the separation - I think there should be room for lesbian fiction at the mainstream table, but change is too slow).

Then there's the business side of all this - I write in various genres. I've been around long enough to see the patterns, and clearly, romance is the better seller. That is simply a fact, no matter how you're published, or who your characters are. Every once in a while, yes, I have written romance, and I will continue to do so. Urban fantasy, dystopian, political fiction even. There is always some kind of suspense in them, because that's where I come from as a reader. I dream of a world in which Lindsay, Lisbeth, Jane and Micky form a secret society to combat patriarchy...Well, they belong to other authors, so dream is all I do where they are concerned.

In my own world, Jordan and Ellie put away the bad guys, and I have many more cases planned for them.