This week, Michelle Arnold visits, and she brings Detective Amy Sadler and Dr. Lira Ward from Out of the Shadows with her. Welcome, have a seat! 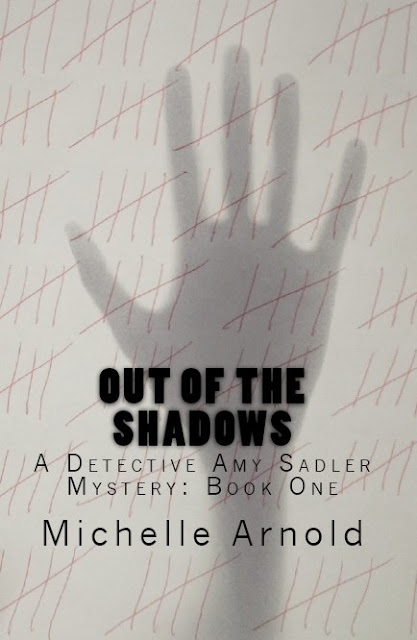 Detective Amy Sadler is a homicide detective in the fictional Midwestern city of Brookwood. This is Amy’s hometown, and she knows it well, but her life hasn’t always been predictable. She grew up as the middle child in an interracial family. Her father was a firefighter who was killed while rescuing a family when Amy was a kid. Although he is hailed as a local hero, he wasn’t always the best husband and father, so Amy has felt a lifelong drive to be a better person than him and to make her mother proud. This pushes her to take on sometimes dangerous assignments at work if she believes it will save others, and it also makes her hesitant to admit she’s gay, for fear of disappointing her family.
Amy’s detective career began not in the Homicide division, but in the Sex Crimes division. There she had a reputation for working well with victims while being ruthless with offenders. On one occasion she went undercover to lure in a serial rapist, but when her then-partner got distracted on the job, she ended up beaten and nearly raped. Her partner wasn’t fired as he should have been, so she transferred to Homicide in order to get a fresh start with a new, more reliable partner. She excels in this division as well and is happy to be putting killers behind bars. Amy is fiercely loyal, tomboyish (though with a feminine side that peeks out at times), and very protective over the ones she loves…especially Lira.
Dr. Lira Ward is a forensic pathologist working in the county morgue. She’s beautiful, highly intelligent, and a bit nerdy. She has a gentle, patient demeanor, but can be a bit awkward and slow to make friends. This is partly due to her own childhood. Her mother is a well-known author who constantly moved herself, and her child, around the country and sometimes overseas. Lira never got much chance to make friends growing up, and she still doesn’t know who her father is. Her mother refuses to tell her and has hinted that Lira is better off not knowing. Moving to Brookwood for work and buying her own house is Lira’s way of trying to make a stable, independent life for herself, but her mother doesn’t approve of Lira’s line of work and they’ve become a bit estranged as a result. When Amy – undaunted by Lira’s awkwardness and mysterious past – makes friends with her, it gives Lira a chance to put down roots in the community. In many ways, she is Amy’s opposite, but the two balance each other out nicely. Lira admires Amy’s boldness and appreciates her protectiveness, while Amy is amazed by Lira’s ability to maintain her sweet innocence in the face of everything they see and comes to view her as a refuge from the storm.
At the start of the book, the two have been friends for a few years and secretly in love with each other for much of that time, but neither believes the other loves her back. Part of this is because they have never been open about their sexuality with each other; Amy hasn’t even admitted to herself that she’s gay, and Lira just happens to have never mentioned her bisexuality to Amy. One night, something drives them to admit their feelings, and their relationship grows and develops over the course of the book, contrasted against the horrifying case they are working on. When the case becomes unexpectedly personal, it threatens to tear their relationship apart. Will they be strong enough to get through it? You’ll have to read the book to find out!

Here is an excerpt:
“So Jennifer O’Malley’s parents aren’t aware of anyone who might have been stalking her or might have wanted to hurt her,” Amy told Lira as she drove away from their favorite Chinese restaurant. “And if he’s abducting women he doesn’t know just because they fit the physical type he finds attractive, he may be on his way to becoming a serial killer. In other words, this case is all kinds of bad. It really doesn’t get any worse than this.”
She stopped at a red light and looked over at Lira, who was being uncharacteristically quiet. She saw that Lira had opened the glove compartment and was taking things out.
“What’re you doing?” Amy asked her.
“I’m organizing your glove compartment.”
Not a good sign. Compulsive organizing meant Lira was upset about something.
“Yes, I see that. Can I ask why?”
“It’s a mess.” Lira examined a little-used tube of lipstick. "Amy, I'm just going to throw this out. It expired three years ago. Where's your trash bag?"
"I don't have one."
"Then what do you do with your car trash?"
"As you can see, I stuff it in my glove compartment."
"I'm going to get you a car trash bag. This is very unhealthy."
"You do that, Lira," Amy said in resignation as she parked her car in front of her building.

Out of the Shadows is available in paperback and Kindle form, and is free to read on Kindle Unlimited. This is the first book in the series, and the second, Beloved Wife, will be out in time for the Christmas shopping season!
Links:
Amazon.com: https://www.amazon.com/dp/B071K6SY56
Facebook: facebook.com/MichelleArnoldbooks
Twitter: twitter.com/berry2120
Posted by Barbara Winkes at 4:10 AM