Out now: The Amnesia Project

In the summer of 2003, three young women and a teenage girl take a trip to New York City…Only three of them return. 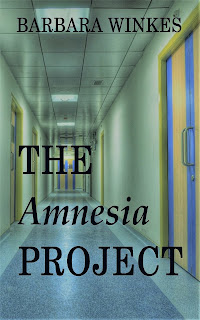 In college, Kerry Rivers wrote a much discussed paper with her friend Hilary, on how to make the world fairer and more equal. In the present, after a State’s election, the winner wants to turn back time and undo rights gained by women and the LGBT community. Hilary, now married and the owner of a billion dollar company, thinks it’s time to act and make their utopia, Exodus, a reality.
But can you really start a society from scratch? And is the promise enough for Kerry to leave behind her career and home?
A number of laws enacted by the new government leave Kerry and her partner Vivien no choice. Together with their friends Hilary and Marc, they embark on a once in a lifetime journey that will come with setbacks and victories, joy and tears.

A chance encounter and instant attraction: For one night, it doesn’t matter that Lauren and Summer lead different lives, with different obligations and dreams. The morning after and the following weeks leave them with many questions.
Could there be a chance for something beyond the obvious connection and chemistry, and how much compromise is involved? Lauren and Summer must find the answers together, as they navigate this new relationship.

Angel. Vampire. Witch. Fairy. Shifter.
For a long time, paranormal beings have lived alongside of humans, and minded their own business. After being mocked, hunted and used for millennia, it’s not in their best interest to get involved in human affairs—yet, these five females can’t turn away from the attacks on the dignity of human women. They have intervened before, but one incident convinces them that the time has come to turn their efforts into a global movement. The tide is finally turning.

The Interpretation of Love and the Truth (romance, standalone)

Chelsea and Gail are engaged to get married. Their relationship is safe, comfortable, and without conflict.

According to Tonya Gray, it also lacks the passion one should feel for the person you commit to for the rest of your life. Chelsea might not trust her because Tonya broke her heart three years ago. As the date nears, Chelsea has to figure out if love means what she has with her fiancée, or what she could have with the woman she couldn't forget.

The Design of Everything Perfect (romance, standalone)

Rose, a detective with the NYPD, tries to battle her frustration from a family visit in New Orleans the only way she knows how: With a one-night-stand. She doesn’t find out until later that the other woman is New York-based designer Payton Smith. They see each other again and the attraction flares once more, but things soon get complicated: Rose isn’t out in her workplace and doesn’t want to be. Payton is out and proud, but she carries issues with her she evades with the help of beautiful designs, and sometimes, a bottle. They both have a long way to go. Can they make it together?

After surviving an attack by a stranger, rookie officer Ellie Harding decides to put herself first and make bold moves in both her career and her private life, refusing to let the traumatic incident get her off track.

Detective Jordan Carpenter faces the decision whether to remain in a disastrous, but long-term relationship or give in to the attraction she feels for her younger colleague. Her partner Bethany isn’t willing to let go, of Jordan or the case, a sadistic killer who murders women for behavior he considers immoral.

Can they find him before he strikes again?

When it rains, it pours: Jordan and Ellie make tentative steps towards a new start in their relationship. At the same time, the hunt for an escaped felon puts pressure on every member of the department. Protecting a witness ends fatally for one of their own, and the case reveals disturbing details in Jordan’s family history. Their biggest challenges, professionally and personally, are yet to come.

The desperate search for Ellie continues. Can they get to her in time? As Jordan focuses all her efforts on finding Ellie, she must deal with her birthmother’s constant attempts at reconnecting. Meanwhile, Ellie tries to reason with the kidnapper whose agenda is unclear. Jordan, along with their friends and colleagues, works to prevent another loss for the department, and a catastrophe for the city.

Jordan and Ellie are back from their well-deserved vacation. While Ellie is still dealing with the aftermath of her abduction, Jordan investigates the murder of a rich businessman. Gerald Ashcroft was a benefactor for many and seemed to have no enemies. Did one of his heirs have a reason to want him dead, or is the murderer someone else close to the wealthy victim? While trying to catch a ruthless killer, they also have to figure out how to deal with Kathryn’s continued efforts to make amends.

The murder of a young woman turns out to be a case of unexpected dimensions: Jordan and Ellie learn that it is linked to the Prophets of Better Days, a cult suspected of criminal activities in multiple states. Uncovering the truth takes some old and new allies, and it might come at a higher cost than any of them imagined…

Jordan and Ellie are moving forward with their plans to get a home together, though not everything happens as intended. Ellie’s career isn’t accelerating as much as she had hoped. Jordan deals with the puzzling murder case of a college student, and the trial of the Prophets of Better Days is coming up. Jordan and Ellie have to shield a young witness from some cult members, while being confronted with another kind of cult with particular interests, operating somewhere in the depths of the Internet. The past is never far behind…

Emma has vowed to stay out of relationships after being betrayed by her ex in a dramatic series of events. All she wants is to find a job and a place to live, and be out of the halfway house by Christmas. She can’t afford to have any feelings for Jayce Finney, the new woman in the house, especially when it’s clear that Jayce has troubles of her own. Temptation might win over self-preservation, leading Emma not only away from her goals, but into danger.

With a job, an apartment and not to mention, Jayce in her life, Emma feels lucky, but she finds it hard to trust that all this good fortune can last. An unexpected phone call seems to confirm her doubts, especially when she thinks she can’t tell Jayce who asked her a favor. The truth always comes out…Fear and doubts take Emma back to familiar places—will she be able to move beyond them?

Jayce’s new case brings unwelcome confrontations with past traumatic events, and having to ask for assistance from an unusual source. As she uncovers the criminal activities behind the scenes of a psychiatric ward, Emma can’t stay on the sidelines. Even though Jayce isn’t happy with her involvement, Emma manages to help her put the pieces together—but danger is looming close for both of them.

Emma has found a home with Jayce, and a career as the manager of Kitty’s greeting card store. Meanwhile, Jayce is thinking about changes in her own career. Life could be perfect if it wasn’t for a criminal choosing the store to hide from the police, on the day Emma is training a new employee for the first time…
Callie & Rebecca (romance series)

Rebecca has everything she ever dreamed of in life: a family, a beautiful home and good friends. When Callie moves into the house across the street, Rebecca is quick to welcome the young writer into the tightly-knit community of Autumn Leaves. She has no idea that Callie will confront her with a truth about herself she might not be ready to face.

All Callie wanted was to flee the big city and finish her latest book in peace, but life in the small town comes with unexpected temptation and danger.

In the follow-up to Autumn Leaves, Rebecca and Callie have made a commitment to their relationship. New challenges arise as Rebecca continues to find her identity. Callie is confronted with an ex she would have preferred to avoid. Nicole wants to be back together with her, and she uses all her manipulative skills to achieve that goal.

With a new minister in town and an unexpected threat, Rebecca and Callie will face even bigger trials. How much can their new-found love take?

Callie has a hard decision to make when her ex, Nicole tries to blackmail her with an old secret. The timing could not be worse as Maggie still suffers from nightmares related to previous traumatic events. Andy, a new resident, is eager to make friends and promote the prejudice Callie and Rebecca have grown tired of. They have learned that trust is the most important thing in a relationship, and when you have it, hate can't touch you.

Rebecca and Callie plan to visit the family of Dina’s boyfriend. They are in for some surprises before they can go on their journey. David has news that brings yet more changes for Dina, and therefore all of the family. Andy’s whereabouts are revealed by an unexpected source.
Callie and Rebecca’s Italian adventure turns out to be an exploration of the past as well as the future. In her book series, Callie’s characters say I Do, but is it too early to think about this question in her real life?