"I want to see gay characters do things as cool as their straight counterparts" Guest blog by Riley LaShea, screenwriter and author


Today, I'm happy to present one of my favorite storytellers (I think that's an appropriate term to use for someone who has written beautiful stories in many different formats), Riley LaShea on her approach to and hopes for LGBT characters: 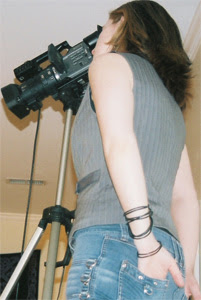 I have been writing gay stories wrong for a very long time. I’ve always had these bigger-than-life tales in my head, where these extraordinary things happen, throwing my protagonists’ worlds into chaos and forcing them to take drastic measures to find some equilibrium. It’s like any big story really. It’s just that most of my protagonists happen to be lesbians.

I’ve written about lesbian hackers, madams, superheroes, criminal enterprises, mercenaries, pirates and terrorists. I have dropped lesbians in the middle of history, into post-apocalyptic worlds, pitted them against government conspiracies, and given them well-deserved breaks in romantic comedies.

Mostly, I have done this in screenplay form. I have always written the stories that I want to see, and I want to see gay characters do things as cool as their straight counterparts. I don’t want to see them suffer through the coming out process or serve as visual proof of a modern, liberal on-screen family.

Of course, there’s a part of me that understands why they can’t make a gay superhero or a gay pirate on the big-screen. Movies with superheroes and pirates tend to be costly, and gay main characters simply haven’t gone mainstream enough to secure the budget.

Still, I tell the stories I want to see. It’s all I can do.

A few years ago, my screenplay Love Letters won best love story in a screenplay contest. It seemed, finally, I had written a gay story right. Funny thing was, I hadn’t written it any differently.

I did an interview for a screenwriting magazine, and the first question the interviewer asked me was “Were you surprised that a movie with a lesbian protagonist won a mainstream contest?”

The answer was “yes,” of course it was surprising. For years, I had been submitting screenplays equally as good, often better, than the one that was awarded. In fact, I had two other screenplays entered in the same contest, both of which I believed to be better than the one that won an award, and neither even made the quarterfinalist list.

The answer was also “no,” though. I don’t enter contests indiscriminately. I am critical of my own work. I knew I had written a romantic comedy true to formula, yet unique to the genre. I knew it was a good read, the jokes were funny, the mistaken identity was believable, and the plot was just complex enough to make readers want to turn the page. It was a good script, it was a good love story, it deserved to win, and if I thought about whether or not a gay story could be judged objectively by a straight reader every time I took a chance, I would never take any chances.

Opening Up the Genre

I am over the “coming out” story. It’s not that I don’t think there’s still a place for that subject, but I look forward to the day when the entire genre of gay fiction - books, film, plays  - moves beyond it, when sexuality is a footnote and not an entire article.

I want to see the organic love stories, the ones that go beyond labels and never asks “Are you gay?” I want two women to fall in love without exposition, just like straight couples do in books and on film.
Maybe I just want to believe that love doesn’t need dissecting, and I definitely believe that talking something to death is the best way to kill the romance.

I want the romance. I want outlandish circumstances. I want one-of-a-kind characters who defy all odds to become heroes in their own lives.

Sometimes, I want these characters to just happen to be lesbians.

Riley is an author, award-winning screenwriter (it was a small award, but still sparkly), an award-winning lyricist (okay, so it was just tickets to Lilith Fair) and an expert get-back-on-the-horser. If you want to know more about Riley or her upcoming projects, she has a website and a blog on which she goes off on whatever tangent seems appropriate in any given day.

Thank you, Riley, for being my guest today!

Next Friday, it's going to be release day and Book Birthday Party for Winter Storm here and everywhere, so check back for fun and prizes of the giveaway.

Posted by Barbara Winkes at 5:17 AM