The Wednesday Women are back! Dive into the world of Cathy Pegau's characters, and don't forget to leave a comment. More details for the giveaway in the post:

Rising from the Ranks:  Secondary Characters Take the Lead 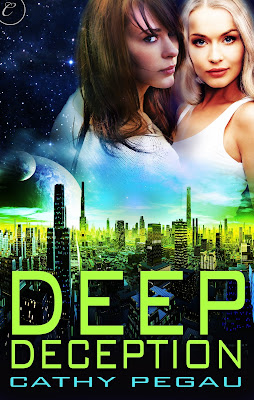 While the main focus of a story is typically on a limited number of characters, readers should be intrigued by everyone populating the pages. They should be almost as interested in the best friend as they are in the heroine. I say “almost” because if your story is about Character A, Character B shouldn’t steal the spotlight. She needs to be a solid presence, not a distraction. But she should, in every sense, be the heroine of her own story. And sometimes that story gets to be told.

Natalia Hallowell spends the majority of my science fiction romances RULEBREAKER and CAUGHT IN AMBER playing a supporting role. Her ability to blend in as an undercover agent for the government makes her great at her job, but a little difficult to know. Yet there was always something about her. She was more than a throw-away character. It took me until the final pages of RULEBREAKER to see her true nature, and when it came through I knew she would be a fun and worthy heroine at some point.

Genevieve “Gennie” Caine first appears in CAUGHT IN AMBER as the right-hand woman to notorious drug kingpin Guy Christiansen. The main characters of that story recognize her as a woman not to be trifled with. One doesn’t rise in the ranks of the criminal world by being kind, and her past activities are not “heroine” material at all. Her actions in CIA help bring the story to its climax, but it was her reasons for those actions that told me so much more about her. Are those reasons revealed in CIA? No. For that, I’d need to write another story.

From the moment I wrote them, I knew Natalia and Gennie were more than typical secondary characters and deserved their own book. Even in supporting roles, they had to have compelling personalities, not just be cardboard characters or sequel bait. Like the main characters, they had lives BEFORE they ever appeared on my computer screen. Things happened to them. Things were done *by* them that led them to their roles in those stories. In a sense, they demanded their story be told, and I was more than happy to comply.

Want to know more about Natalia and Gennie? I’ll send an ebook copy of DEEP DECEPTION to a randomly chosen commenter (be sure to leave a viable email addy!). Winner announced Sunday, Sept. 8th.

In the meantime, here’s the blurb for the book:
Colonial Mining Authority agent Natalia Hallowell doesn't always play by the rules, but she wouldn't compromise a case either. Put on administrative leave under a cloud of accusation, with no support from her boss, Natalia seeks a little anonymous companionship at her favorite bar. But she's surprised when the woman who catches her fancy starts buying her drinks.
Desperate, Genevieve "Gennie" Caine has no choice but to seduce, drug and tie Natalia to the bed to get her attention. With the Reyes Corporation after something she has, Gennie needs Natalia to open an investigation and distract them long enough for her to get off Nevarro.
Natalia doesn't trust Gennie—despite the growing attraction between them—but the corporation's suspiciously high profits and abnormal business dealings convince her that they must be hiding something. She has no idea just how deep the deceptions run…

An excerpt can be found here.

Cathy Pegau's muse almost always finds some sort of science fiction, fantasy or paranormal bend to the stories it offers. Her debut novel, Rulebreaker, was released in 2011. Caught in Amber in January 2013, and the third installment of her Nevarro books, Deep Deception, came out in May 2013. She lives in Alaska with her husband and kids, several pets and the occasional black bear that roams through the yard.

Cathy enjoys chatting with other writers and readers. Drop her a note at cathy@cathypegau.com or find her on Twitter @CathyPegau.

Have a great day, everyone!
Posted by Barbara Winkes at 6:14 AM