Today, I'm thrilled to welcome Ellen Hart and the heroine of her mystery series, Jane Lawless. Jane has been one of my alltime favorites since I first discovered the lesbian mystery genre. Thank you so much for visiting Word Affair!

If you're intrigued, you can enter the giveaway for one copy (paperback, US only, runs until next Tuesday noon EST) of The Cruel Ever After by leaving a comment on this post, with your email address or any information that would allow me to find you in case). Thank you! 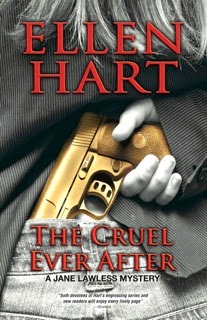 (all graphics provided by author)

It all started innocently enough in the spring of 1986.  I’d always wanted to write a novel.  Since I had my summer free that year, I thought I’d give it a shot. I’d been a fairly good academic writer, though that didn’t mean I could sustain plot, character, tension, etc. for sixty-plus thousand words.  Still, I figured if I didn’t make the effort at some point in my life, I’d end up with a huge regret.

Two hundred pages in, I was overwhelmed by the sense that I’d written nothing but dreck.  The story meandered. The mystery drooped.  Pace was non-existent. I had no idea where it was going or how it would end.  Most importantly, none of the characters were vivid enough to keep me interested in writing about them.

A year later, after making a decision to systematically take apart other mystery novels to see how they were constructed (something I now tell my students to do), I spent the winter reading P.D James, the English crime novelist.  I wanted to see the trees, the underlying structure, not just the forrest.

The following fall, my partner and I took part in a local march--the “Take Back The Night” march.  A thousand or so women congregated after dark in a local park and then moved down Hennepin Avenue, Minneapolis’s main drag.  We chanted that women had a right to be safe at night.  I’d been working as a kitchen manager at a sorority for many years and that night I saw a young woman I recognized as a member.  She was wearing a lavender arm band, designating her as a lesbian. I knew she wasn’t out at the sorority, and that got me to thinking.  What was it like to be a closeted lesbian in a group that was, by its very nature, riotously heterosexual?  That question bloomed into HALLOWED MURDER, my first book.

Okay, I had a crime. I had a solution.  What I didn’t have was a sleuth.

Cordelia appeared to me pretty much fully formed.  Whenever she arrived on the scene, the pages almost wrote themselves.  She was funny.  She was annoying.  She was larger than life.  She was loyal.  She was big and intuitive and opinionated.  Most importantly, she was a theater director and Jane’s best friend.

Jane was harder for me to understand.  I needed someone to serve that first story--a woman who had been a member of the sorority in my novel--also in the closet during that time in her life.  I needed that parallel because of resonance. In the book, Jane reconnects with her sorority as one of the alumni advisors. One of the members is murdered.  Jane becomes involved in figuring out what really happened.  But who was Jane Lawless?

I created a life for her--a younger brother, a lawyer father, an English mother who died when Jane was in her teens.  But, the truth is, I’ve come to know Jane the same way my readers have--slowly, over a period of twenty-three books. Jane is the central mystery at the heart of all my books.  Understanding her, even being a little bit in love with her (don’t tell my partner), is what keeps me coming back for more. 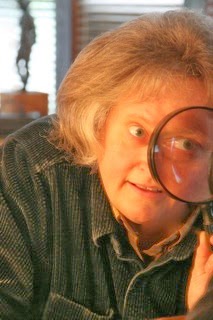 Posted by Barbara Winkes at 4:16 AM