This week, Debra Webb brings the main character of her Faces of Evil series, Jess Harris, to the Wednesday Women table. "Vile" is the latest installment. Meet Jess below...and thanks Debra for visiting! 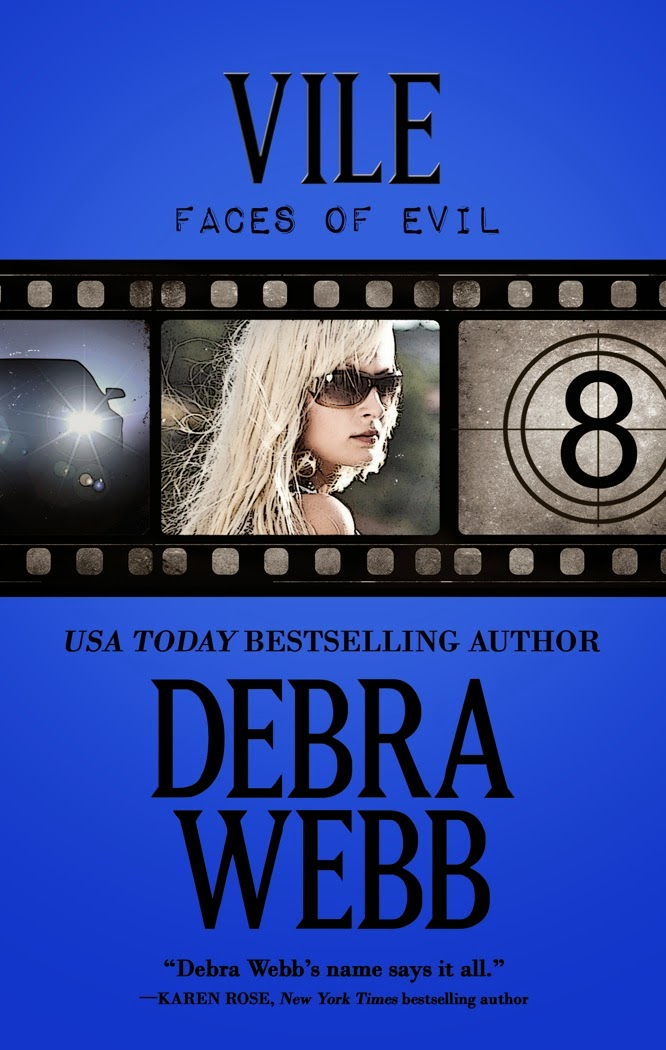 
My name is Jessie Lee Harris and I spent seventeen years working with the Federal Bureau of Investigation as a field agent and then a profiler. My parents passed away when I was ten years old and my older sister and I spent our formative years in foster homes. Life cheats you that way sometimes.

In high school I met and fell head over heels in love with Dan Burnett. He was a rich guy from the other side of the tracks, but that didn’t matter to us back then. We were in love and nothing was going to stop us. After graduation, I couldn’t wait to put my hometown of Birmingham, Alabama, in my rearview mirror. Other than my sister, there was nothing left in the so-called Magic City for me. So Dan and I left for college full of passion and with big dreams. But sometimes passion fizzles and dreams don’t always come true. Four years later Dan returned to Birmingham without me. I focused on work, became one of the best damned profilers the Bureau has ever seen.

Fast-forward about twenty years and things have changed again. My personal and
professional life crashed down around me. I was put on administrative leave after a
bumbled investigation that resulted in a suspected serial killer going free. I welcomed an unexpected invitation to escape from my current reality. My expertise was needed on a case involving four missing young women. The problem was, the case was in Birmingham and the top cop was Chief of Police Dan Burnett.

I never was one to look back, but I was a little desperate and Dan needed help. Next thing I knew, I found myself spiraling into the past I thought I’d left behind. And if having sparks fly between us wasn’t frustrating and distracting enough, the serial killer who got away followed me to Birmingham! Before my head stopped spinning, I had resigned from the Bureau, accepted a deputy chief position with the Birmingham PD and was back in Dan’s bed. Who knows, maybe we’ll have better luck at love as forty-somethings.

Since the serial killer intent on having me just won’t let go, we’ve had some pretty bizarre cases to solve. Other than that one bumbled investigation, I’ve never failed to solve a case assigned to me. I learned something very important a long time ago: The motive will reveal the identity of the one committing the crime. It’s simple really. Any act of evil committed by one or more persons against another is driven by motive. Every motive tells a unique personal story, painting a vivid picture that reveals the dark inner nature hidden beneath the image presented for the world to see. All of us possess a basic goodness, but we each also harbor the potential for evil. The choice not to cross that moral line ultimately separates the good from the bad.

Come with me as Birmingham’s Major Crimes team and I climb to a higher level of evil with each case. You might discover that to find the face of evil you only need look in the mirror and, just maybe, when I catch that sick SOB obsessed with me, I can finally have a real life with Dan.

The Faces of Evil starts with Obsession, then Impulse, Power, Rage, Revenge, Ruthless, Vicious, Vile, Heinous, and Depraved. All are available now or for preorder exclusively at Amazon. The series finale, Most Evil, is coming this December!

DEBRA WEBB, born in Alabama, wrote her first story at age nine and her first romance at thirteen. It wasn’t until she spent three years working for the military behind the Iron Curtain and a five-year stint with NASA that she realized her true calling. A collision course between suspense and romance was set. Since then she has penned more than 100 novels including her internationally bestselling Colby Agency series. Don’t miss a single installment of her debut romantic thriller series, the Faces of Evil! Visit Debra at www.thefacesofevil.com or at www.debrawebb.com. You can write to Debra at PO Box 12485, Huntsville, AL, 35815.

Posted by Barbara Winkes at 3:53 AM