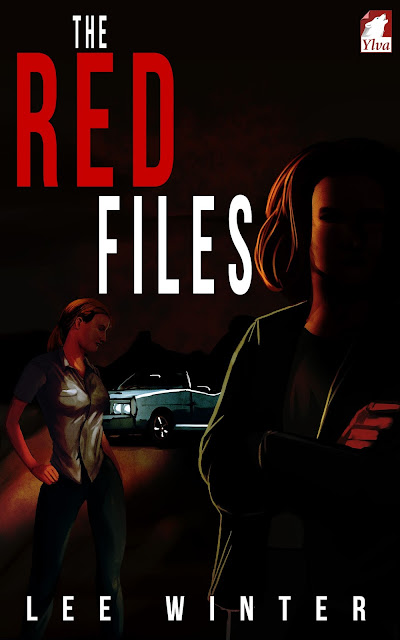 Lee Winter is an award-winning Australian newspaper journalist and author. Her debut novel, mystery thriller, The Red Files, is available now from Amazon and publisher Ylva. Her story follows two warring reporters, the acerbic Boston political journalist Catherine Ayers and knockabout Iowa girl Lauren King, who are forced to work together to uncover a story of a lifetime. Lee has arranged for us to sit down with her characters, after their world exclusive, to learn more about them.

INTERVIEWER: Ms Ayers, a pleasure to meet you.
AYERS: Well, let’s see if you still feel that way by the end. (Smirks)
INTERVIEWER: Oh. Ah, OK. That's a lovely outfit. Armani?
AYERS: I co-wrote the scoop of the decade and you want to know what I'm wearing? Well, if it helps, it’s fabric.
LAUREN: (Background) Catherine. Behave.
AYERS: I apologize. (Smiles.) I have been known to be a little…caustic.
INTERVIEWER: So I hear. Isn't your nickname the Caustic Queen?
AYERS: Apparently. I have no idea how these rumors get started.
INTERVIEWER: Well the nickname may have been something to do with the fact you did what few managed, enduring a fall from grace after running a Washington Bureau, being thrown to the wolves in LA on the gossip-writing circuit and then resurrecting your career in spectacular style with a scoop you co-authored with Lauren King.

AYERS: Was there a question in there? (Eyebrow rises)
INTERVIEWER: Yes, how did it feel going from DC's elite political circles to LA's entertainment reporting?
AYERS: Let me think: I went from breaking more scoops on the Daily Sentinel than all the other reporters put together and eating corrupt senators for breakfast to uncovering Justin Timberlake's lunching preferences. I obviously found it an exciting new chapter in my career. Very…enriching.
INTERVIEWER: The question everyone wants to know—what happened? How could such a seasoned reporter make such a huge mistake to have that demotion occur?
AYERS: ....
INTERVIEWER: …
AYERS: …
INTERVIEWER: …
LAUREN: Um, she’s never gonna answer that one. Probably have more luck milking a tractor.
AYERS: Is that an Iowa thing?
INTERVIEWER: Moving right along, your scoop was an incredible story. How did you stumble upon it? Can you set the scene for us? You and Ms King were at a party in LA and then what happened?
AYERS: We were both entertainment reporters for The Daily Sentinel. If I recall, King had just irritated me beyond belief, again, as was her modus operandi at the time…
(Lauren laughs in background)
AYERS: I noticed she was circulating with some women I hadn't seen before. When you’ve spent a lot of time on the parties’ circuit, you start to recognize faces, including the hangers-on, the escorts and so on. And the place was filled with women—thirty-four as it turned out—who appeared to be out-of-town prostitutes, not your typical LA escorts.
INTERVIEWER: What does a typical LA escort look like? Do you know many?
LAUREN: Yeah, Ayers, tell us: Do you? (Scoots forward)
AYERS: Hilarious. Now bear in mind we were at a high-powered business launch for payroll tech firm SmartPay USA. There were two governors in attendance, one from California, one from Nevada. It was definitely odd having so many prostitutes at such an event, especially given they weren’t local. So we began a joint investigation. We pulled one thread and another came loose—the story took us to Nevada and back and into some very dark things indeed. As the world now knows.
INTERVIEWER: Indeed. I see Ms King is with you today.
LAUREN: Hey. (Waves)
INTERVIEWER: You were an Iowa girl before coming to LA to do entertainment reporting. What was your background there?
LAUREN: Butter cows. Pork Princesses. Um, wheat yields.
AYERS: Don't forget ugly tractor caps. Her specialty. She's really far too modest.
LAUREN: Catherine.
AYERS: Lauren?
INTERVIEWER: You two certainly seem to get on well now. I'd been told you were arch rivals when you worked together. What changed?
LAUREN: Nevada clears your head.
AYERS: Plus there were the goats.
INTERVIEWER: Goats?
LAUREN: Don't ask.
AYERS: She’s just shy. Would you like to see the video? It wouldn't take a minute. (Reaches for her phone.)
LAUREN: I had that taken down. And there were no goats – it was a misunderstanding. She's kidding.
INTERVIEWER: She is?
LAUREN: She is. It's just hard to tell on account of all her prickles. She's a pussycat when you get to know her.
AYERS: Pussycats do have claws. Put that on the record: “Catherine Ayers has rapier-sharp claws.”
INTERVIEWER: So noted—and, er, it was never in dispute.
AYERS: Excellent.
INTERVIEWER: So what's next for you two? I hear you both have just gotten new jobs?
AYERS: I intend to pursue the hard-hitting stories overlooked by the asleep mainstream media. The stories that fall into the cracks. Such as illegal drone warfare. I intend holding DC’s feet to the fire – as much as I can.
INTERVIEWER: And Ms King?
LAUREN: Um, I have to do the graveyard shift on the police beat. Lots of 4am starts.
AYERS: What? Since when?
LAUREN: Well I only just found out.
AYERS: That’s insane. I mean, I don't think...
LAUREN: It's fine. We'll, I mean, I'll be fine.
AYERS: Of course. (Folds arms)
INTERVIEWER: Wait, ‘we?’ Are you two—
AYERS: No comment.

LAUREN: What she said.
INTERVIEWER: Well, that's all I have time for...
AYERS: If you mention a 'we' in your story, I will make it my mission to get drone flightpaths reprogrammed over your home at all hours. I know people.
INTERVIEWER: What! You can't do—
LAUREN: She's joking. Right, Catherine?
AYERS: ...
AYERS: ...
LAUREN: Catherine.
AYERS: Yes. I'm kidding.
INTERVIEWER: OK, well, thank you for your time.
LAUREN: You're welcome.
AYERS: Is it still a pleasure to have met me?
INTERVIEWER: Oh. Um…
Background laughter.

Posted by Barbara Winkes at 4:06 AM