It's been a while, but here's finally a new Wednesday Women blog! This week, KD Williamson joins us to introduce her leading ladies. Thank you, KD! 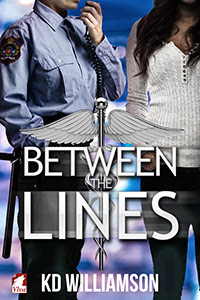 Between the Lines is third book in the Cops and Docs Series. Like my other books, it is very character driven, but this one is even more down to earth. Characters are people too so by the time the last page is turned or maybe even before that you’ve discovered someone to have lunch with; play video games; stare at/pick up women or even binge watch Netflix.
As a reader, I think you’ll find all that and more in rookie cop, Haley Jordan. She’s loyal, funny, caring and is as laid back as they come when she’s off the clock. She values family which include her friendships and works hard to be friend Haley, daughter Haley, slutty Haley, and partner Haley. She keeps strong boundaries between them all. There’s no drama and no unwanted expectations. It’s just the way she likes it. With that being said, she isn’t the stereotypical butch.
Dr. Tonya Preston is far from the quintessential ice queen. Still, she has her moments, which aren’t without justification given what she’s dealt with in her home and community. She’s not meek. She’s not mild, but she is stuck. Like Haley, she has many roles and does her best to excel at them, even if they aren’t who she wants to be. Duty to her family and her job, as a psychiatrist, has made it hard to have a life and she’s gotten used to feeling lonely even when she’s around people who profess to care. She’s gotten used to pretending. She’s gotten used to ignoring her own needs.
Their first meeting is a catalyst for them both to accept their lives as is or make changes. Haley brings the fun, the laughter and heat into Tonya’s life. In return, Tonya brings steadiness and an awareness that Haley needs to get through an unexpected situation. They are strong. They’re snarky. They both do what they think is right. They’re smart and they know their own minds. In other words, they fit, making them everyday women with everyday problems centered around family, work and each other.
Pure romance.

Posted by Barbara Winkes at 4:40 AM