A Few Good Men (In Lesbian Fiction), the last day of the Spring Mega Sale, and some links!

Before my blog of the week, here's a reminder that today is the last day of T.B. Markinson's Mega Lesfic Sale over at I Hear Lesfic. Multiple authors, great discounts you don't want to miss! 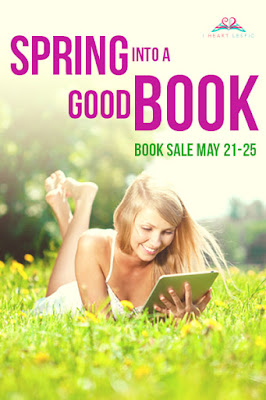 Second - it's lesbian fiction, so why talk about make characters? Find out in

I write lesbian fiction – that means the roles of the main characters and the love interest belong to women. Women are represented in higher numbers than it’s often the case in mainstream, and yet, they don’t live on a planet or an island by themselves.
They have fathers, brothers, friends and colleagues at work. Even though these characters are not the focus, I consider a few good men in my stories important.
I write what I want to see in the world – lesbian leads, women who are capable and independent, who get the job done. They often fight the odds against misogynist adversaries (cop against serial killer, for example, but also women facing everyday sexism), so, I think it’s impossible to add some supporting characters that don’t represent the same old: Men who don’t think that they are entitled to women’s bodies, who don’t think that women owe them sex, and who aren’t sent into a murdering rage by rejection.

There’s Derek in the Carpenter/Harding series, who is a reliable, good friend to Jordan and Ellie, but also gives Kate time so they can both figure out where they want their relationship to go.

Khalid in Rise helps his mother run a shelter for women in a place where the help they provide is illegal.

Marc in The Exodus Strategy rejects the legacy of his grandfather who used to berate his wife at every turn, and likely worse, and who didn’t see women as equal partners in life and business.

My goal in the first place is to tell stories about women who are comfortable around other women, as lovers, friends and co-workers. And I want the men in their lives to be aware of, and reject toxic masculinity, in fact understand that when we talk about the matter, it’s not about them.

And, as always, here are some lesfic links of the week:

You can still vote for Maria Siopsis' book cover of Endless over at AllAuthors.

Posted by Barbara Winkes at 4:33 AM