Short Story: Traces of You

The sky was already clouding over, a few scattered raindrops falling, when she got here.
As Tory leaves the hairdresser, it’s pouring down. The wind is tearing at her umbrella which is next to no protection to her clothes and freshly made up hair.
She makes it one block further before giving in to the lure of the Starbucks on the corner. She shivers out of her wet coat and orders herself a Caramel latte.
The sweetness and warmth is a nice solace until her gaze falls onto the poster in the store on the other side of the street. Its bright colors spark memories that Tory wanted to forget forever.
She’s been fine for so long, but on this cold autumn day, the images come rushing back in.
Hannah.
Tory can’t even think of her without her heart starting to beat faster, so she doesn’t do it very often. It’s too stressful. Maybe she just doesn’t want to obsess about missed chances when she knew, right from the start, that there weren’t any.
Tory lied to Hannah pretending she was just as clueless and inexperienced, in order to make it easier on her, to make it look like an experiment rather than the beginning of something. Tory has made some less than smart decisions regarding unrequited crushes, if you can call that experience.
* * * *
It was in the air. Unspoken, but loudly, that from the first moment of giving in, an admission, a touch, there would be no turning back. If they were setting themselves up for hurt, to never know would be so much worse.
Tory remembers sitting in the center of the bed, so nervous her hands were trembling. Hannah, gorgeous, troubled, scared, looking at her with so much affection it made Tory want to cry. They sat side by side, fingers touching, entwining. Leaning closer.
Hannah backed away.
“I’m sorry,” she said, self-consciously. “I have no idea what I’m doing.”
The situation had a touch of absurd, and all of a sudden, they both had to laugh, giggling like girls, not the responsible adults they both pretended to be. The silliness helped to take off the edge. Tory finally found her words.
“I want you,” she can still hear herself say. “If you can’t...If you want to go, now would be the moment. I’d understand.” She reached out to touch Hannah’s face, her hair, her own skin tingling with the want for more.
“Tory...”
Hannah didn’t go. She pulled Tory to her and kissed her like she absolutely knew what she was doing, and then her hands were all over...
* * * *
The honking of a cab driver jolts Tory out of her trip down memory lane, nearly making her knock over her mug. She sighs. There is really no point going back there, it’s in the past, long enough for the images to fade if not the sensations that come with them.
* * * *
“You are so beautiful,” Hannah whispered. “I love you.”
* * * *
The last bit of her latte has gone cold. Outside, the rain has stopped. Tory puts on her coat, determined to brave the chilly air of winter to come. Maybe next summer, she’ll be brave enough to see Hannah again. Maybe this time, she’ll escape with her heart unbroken. 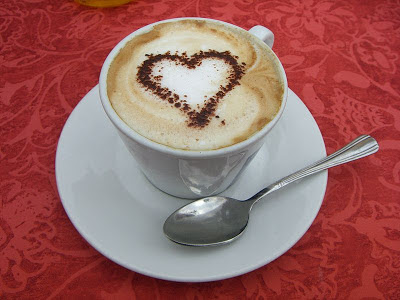