This month, you're going to meet some feisty fictional women on Word Affair.

Today, I welcome Nicky Wells' character Sophie Penhalligan from her rock star trilogy. Sophie's your kind of gal? Enter to win an e-copy of book 1, Sophie's Turn by leaving a comment on this post (don't forget your contact info).

The winner will be chosen randomly among all entries on Tuesday, before the next Wednesday woman brings you a new giveaway. For now, dive into the world of Rock & Romance: 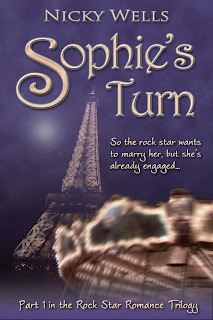 Hi! My name is Sophie Penhalligan and I’m really pleased to meet you here on Barbara’s blog. Barbara has asked my author, Nicky Wells, to introduce me but I thought I’d do the job myself.

When you first get to meet me in Sophie’s Turn, I’m twenty-eight and working happily as a journalist with Read London. I’m settled in my job, I have a lovely little flat in South London, and I have a loving boyfriend. Tim and I, we’ve been together nearly two years when the story starts. He has his quirks, that’s for sure, but I can see beyond a few…strange habits. My best friend Rachel thinks Tim’s wrong for me, and she cannot stand his near-compulsive behaviour but that’s her problem, not mine. It’s a little tough, juggling my love and affection for the two most important people in my life, but I’m managing just fine. See, I believe in being loyal to people and standing by them, no matter what. I’m not one for fooling around or, goodness forbid, playing around. It’s just not me. Besides, I’m a terrible liar—I couldn’t tell a white lie to save my life, so there’s no way I could ever betray anyone or be dishonest. I can be a bit ditzy at times and I will admit that I suffer from the occasional bout of foot-in-mouth disease, but who doesn’t?

Alas, things become very tricky for me when rock star Dan crashlands back in my life. You see, I’ve had a crush on this famous rock singer for as long as I can remember. I even got almost up-close-and-personal with him once, long before I met Tim. But I chickened out.

Yet Dan hasn’t forgotten; on the contrary, he seems to remember me all too well and he starts asking me out for dinner. Innocent, naïve little me goes along with this, of course. I mean, I’m allowed to have friends beyond Tim, right? And I am so, so over being a star-struck teenager. I am. Really!

Turns out, though, that Dan appears to be quite serious about dating me. Now come on, what would you do, honestly? Well, exactly. Only I don’t. I stick with Tim. And Tim does propose, right on cue, right when Dan turns up back in my life. See? Sorted. I made the right call.

I tell you what I do, but I won’t spoil the story for you. What I do is this: I retreat to my hotel room, and I ponder. I examine myself and my life really closely. I imagine my future. I project. I weigh options. I look the truth in the face, warts and all. And I make a decision. It’s not the decision I expected to make, but I know it’s the right one. I am true to myself and my beliefs. Nicky was a little upset with me when I took that turn. “You’re a stronger woman than me, Sophie,” she told me but she wrote my ending anyway.

And that’s…me. For now! Because of course my story continues but that’s the stuff for another visit, maybe!

Meantime, it was really nice to meet you. Thank you for your time! I’ll pop by again later so if you have any questions for me, don’t hesitate to ask. XX Rock on! 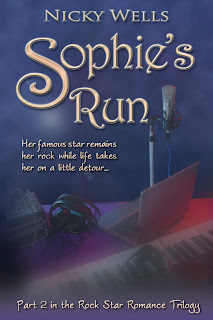 About Nicky Wells: Romance that Rocks Your World!

Nicky Wells is your ultimate rock chick author. Signed to US Publisher, Sapphire Star Publishing, Nicky writes Romance That Rocks Your World, featuring the rock star and the girl next door.

Born in Germany, Nicky moved to the United Kingdom in 1993 and currently lives in Lincoln. In a previous professional life, Nicky worked as a researcher and project manager for an international Human Resources research firm based in London and Washington, D.C. Like her leading lady, Sophie, Nicky loves listening to rock music, dancing, and eating lobsters. When she’s not writing, she’s a wife, mother, and occasional teaching assistant. Rock on! 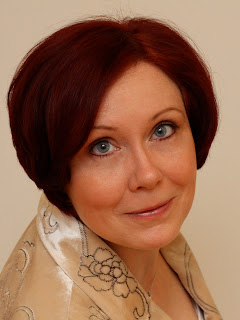 Who says that the road towards true love is straight and even?  Sophie is certainly discovering that it is anything but.

So she has finally found the man of her dreams! Well… she knows who he is, even though she hasn’t actually quite met him yet.  But she misses her opportunity, and then her life goes crazy.  Rock star and ex-fiancé, Dan, keeps getting in the way of her new romance—even if he is just trying to be helpful.  A fire, an impromptu mini-trip with Dan, and a dreaded wedding later, Sophie is still struggling to meet the love of her life. Then, just as she is getting it together with her perfect man, best friend Rachel commits an act of unspeakable betrayal.

Sophie has had enough. Confused and distraught, she decides that it is time for radical change.  Surprising herself and shocking her friends, she embarks on a secret journey and eventually gets her life back on track.

Slapper? Slut? Adulteress? Sophie Penhalligan's life and moral universe is turned upside down when rock star Dan proposes to her in full knowledge that she is already engaged. She has always loved Dan, in a remote-crush kind of way. She thinks she loves her fiancé, Tim. What is she to do?

It's all happening because her past has come to tempt her. Nine years ago, she met her teenage idol and rock star extraordinaire, Dan Hunter, up close and personal. Well, almost!

Now Dan has crash-landed back in her life just as Sophie is happily embroiled in a relationship with Tim, her boyfriend of two years. Until recently, she was confident Tim would eventually propose. But while his persistent inaction is beginning to cast a cloud over their relationship, Dan's sudden reappearance poses a whole new dilemma.

Having accompanied Dan's band to Paris, Sophie suddenly finds herself engaged to Dan while her erstwhile fiancé Tim is... well, doing whatever it is Tim does back in London. Torn between the dream-come-true and the sensible-thing-to-do, Sophie concludes her inadvertent journey of self-discovery with an ending that surprises herself, and everyone around her.

Sophie's Turn is a glamorous contemporary fairy tale that will make chick-lit and romance lovers laugh, cry and rock along every step of the way.


Thanks Nicky for introducing Sophie to us!