It's Wednesday Women time! I am happy to bring you a guest blog by NYT bestselling author Rebecca Cantrell, whose leading lady Hannah Vogel takes center stage today. Meet Hannah, one of my favorite fearless women on my bookshelf, and read about Rebecca's other publications below:

Many thanks to Rebecca for being my guest this week!

The Many Faces of Hannah 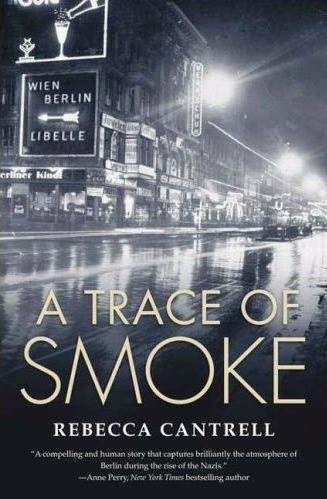 Hannah Vogel lives in a dangerous time—Germany just before World War II. As she watches the Nazis seize control of the country she loves, she fights to do the right thing. But in a world with ever more shades of gray, finding the right thing isn’t a simple as it sounds. Like every person, she has a lot of roles to play.

Character. To me, she’s the main character in a series of mystery/thrillers set in Berlin in the 1930s. The novels are all told in the first person, and the voice is Hannah’s—smart, tough, funny, and too stubborn for her own good. I’ve spent years and, over a thousand pages, following her through pre-war Germany.

Sister. To her brother, Ernst, she’s the sister who took him in when their tough soldier father kicked him out. He appreciates how hard she worked to support him during the hyperinflation of 1923, when a dollar started out worth 9,000 Reichsmarks and ended up worth 4,000,000,000,000 (trillion) Reichsmarks. When he moves out and starts working as a cabaret singer, he tries to pay her back, until he is murdered.

Reporter. Hannah works as a crime reporter for the Berlin Illustrierte Zeitung, writing about the crime beat and doing courtroom sketches. She relies on the contacts she developed there to help her solve her brother’s murder and, later, to uncover even greater crimes being committed by National Socialist government. She tries to tell the stories of those who don’t otherwise have a voice.

Spy. Hannah realizes that it isn’t enough to get herself and her adopted son to safety. She has to go back and bring out secrets that will show the world what is happening in Germany, that will encourage those in power in other nations to step in an stop it, or at least to be ready to defend themselves when the Nazis turn their attention outward.

Lover. Hannah has fallen in love a few times in her life and in the books. She’s too stubborn, too willing to put herself in danger to help others, too determined to show the world the truth, and too unconventional to make it easy for her or the men who love her.

Mother. A young boy shows up on her doorstep one night with a birth certificate listing Hannah’s murdered brother as his father and Hannah herself as his mother. Hannah struggles to reunite him with his real parents. She feels like she didn’t do a good job raising her brother, and she’s too afraid that she will fail this little boy to want to keep him. But she can’t let him go. Those are just a few of the roles that Hannah plays in the world. Like everyone, she complicated, and her life is a juggling act. Sometimes, she drops some of the balls, because—who doesn’t?


~ ~ ~
REBECCA CANTRELL is a New York Times bestselling thriller author. Her novels include the Order of Sanguines series, starting with The Blood Gospel; the award-winning Hannah Vogel mystery series, starting with A Trace of Smoke; and the Joe Tesla thrillers, starting with The World Beneath. She, her husband, and son left Hawaii's sunny shores for adventures in Berlin. Find Rebecca Cantrell on Facebook, Twitter, and at www.rebeccacantrell.com
Posted by Barbara Winkes at 4:58 AM