This week, I invited Liv of RizzlesUnlimited to Word Affair to talk about Rizzles. If you know me a little, you know I'm quite fond of Angie Harmon since the days of Women's Murder Club, but I've also been a longtime fan of James Patterson's and Tess Gerritsen's respective book series, so when I learned she was cast as Jane Rizzoli, I was quite thrilled about it.
Today, Rizzoli and Isles is a hit series for TNT, and for many fans, the Rizzles ship plays a big part in that. Don't forget to check out Liv's awesome blog which is one of the go-to sites in this fandom, and of course the beautiful artwork by thepriceismeg.
~Barbara

I can’t say I was hooked on ‘Rizzoli & Isles’ after the first episode. I wasn’t; I kept watching because my wife thought it was a fun show. I was hooked after the eighth episode in which we find out the big bad guy has another apprentice on the outside who is now stalking Jane Rizzoli. There was something about the interaction between Jane, the tough-as-nails, heart-of-gold tomboy, and Maura Isles, the tough-yet-compassionate, quirky-yet-endearing socialite that just clicked with me.
Here were these two women who, ordinarily, wouldn’t so much as say hello to each other, but, because of their work and the compassion they shared for the people around them, had become these incredibly close best friends. When Maura was willing to learn how to handle a gun in order to protect Jane just so Jane could get a decent amount of rest, it struck me that these women shared a bond the likes of which hadn’t caught my attention since Captain Janeway and 7 of Nine or Xena and Gabrielle.
Up until then, I hadn’t really been watching the show. It was background noise to pacify my wife’s television watching preferences. As I rewatched the first few episodes and really paid attention, I saw very clearly the start of a beautiful romantic relationship between these two women that was only heightened by the natural chemistry between Angie Harmon and Sasha Alexander. There was this wonderful subtext underlying the show, and I couldn’t ignore it.
I jokingly tell people I started writing fan fiction for the show because I was bored at work, but the truth is I started writing it to showcase the romantic relationship I saw blossoming in between the lines because it was strongly there. Their personalities balance each other well, they are willing to go way above and beyond to save each other in ways a normal friendship would not bend, they spend most of their free time together, and they understand each other in ways no one else does. It’s the perfect blend to produce a love story to rival most on T.V. these days. 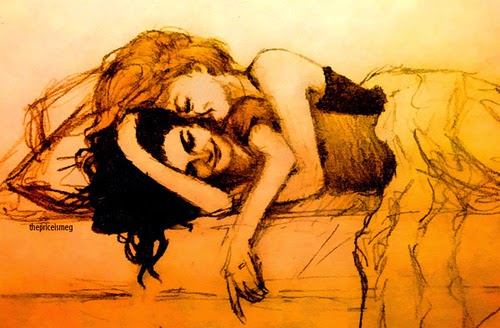 I’m not the only person who sees it. The Rizzles following is strong. It saddens me the media makes the ship pairing very base. They tend to make it about the sex, that fans want to see Jane and Maura in bed together, but they’re wrong. It’s not about the sex. It’s about the relationship. The kind of relationship Jane and Maura have with each other is just as strong as Castle and Beckett or Bones and Booth. The parallels between Jane and Maura’s relationship and those canon couples’ relationships is astounding.
I’m enamored with the Rizzles pairing because of the potential from Season One. You don’t find a bond like that every day, and, if it’s there, I feel it should be nurtured, even if it’s only fan fiction on the internet.
It is the greatest ‘one true pairing’ that will never be told in canon, right?

Posted by Barbara Winkes at 4:13 AM