It's time for another Wednesday Woman! Today, Ann Aptaker introduces her heroine Cantor Gold. The first in the series is out there for you to enjoy, and a second one is coming this September...but wait. You can enter to win an e-book and meet Cantor. How? Just leave a comment on this blog, with some info on how I can find you (email works best), and your name will go in the hat. The winner will be drawn, as usual, next Tuesday noon EST.

Many thanks to Ann and Cantor for visiting! 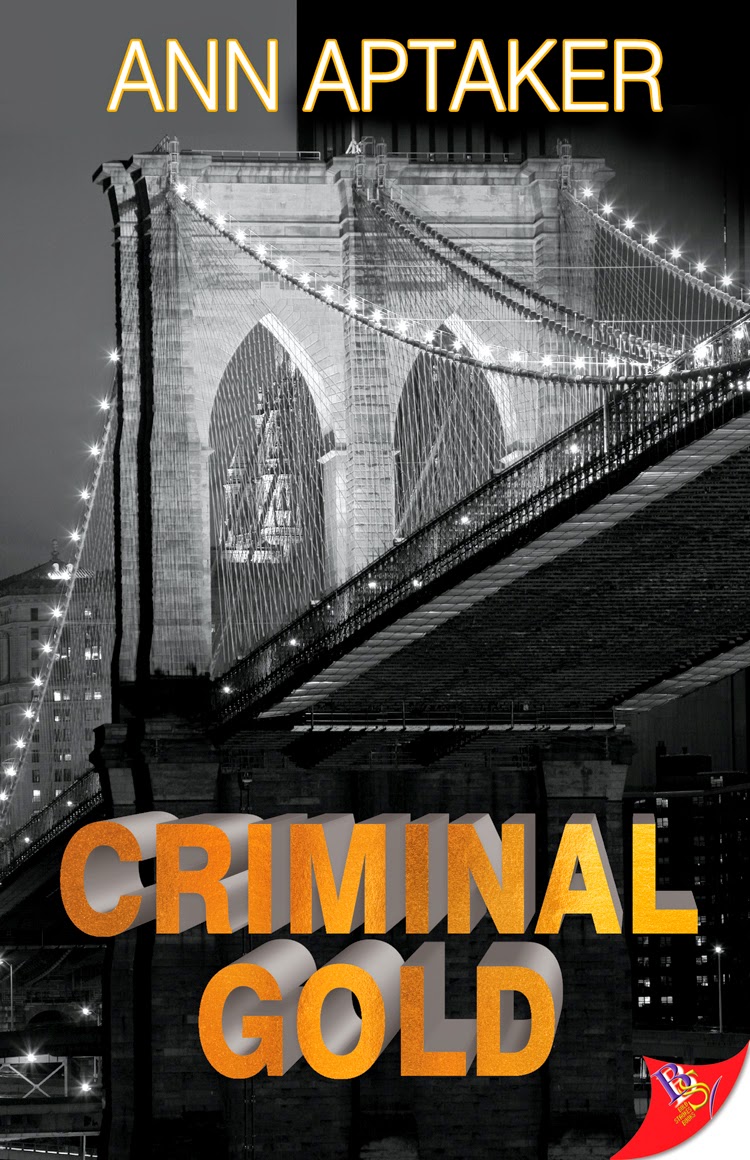 
I especially like writing about crime in the past, in the days before computers did our thinking for us, before we were perpetually connected to everyone else through our electronic devices. There was delicious anticipation in waiting for that all important letter to come in the mail. There was mystery in the missed phone call.


My current novel, CRIMINAL GOLD, takes place in 1949 New York. The next book in the series, TARNISHED GOLD, due for release from Bold Strokes Books in September, is set in 1950. And the third in the series, which I’m currently writing, takes place in 1952. The series will move through the 1950s and into the early 1960s. So my protagonist, the smuggler and dapper dyke Cantor Gold, her associates Rosie Bliss and Judson Zane, her nemeses Sig Loreale, Mom Sheinbaum and the police, and all the femme fatales, mobsters, grifters, denizens of the hidden LGBT world, and everyone else in Cantor’s milieu, must pursue or elude each other through their own ingenuity, without benefit of Google searches, instant messaging or GPS. They must rely on their own brains to find their way through the thicket of their situations. In other words, in order to commit the crime or solve it, escape crime’s consequences and stay alive, or escape beatings or arrest, they must rely solely on the organic properties of being human: seeing, hearing, touching, talking, acting, reacting, thinking.


All of this is a pretty rich experience for me as a writer. It forces me to get back to the basics of human inventiveness in order to believably present a time when we had to figure things out on our own. And if popular culture is anything to go by, stories set in the 1950s and ‘60s provide equally rich experiences for readers, and for film and TV audiences, too. From TV’s “Happy Days,” “Crime Story,” and “Mad Men,” through film’s “Grease,” “Back to the Future,” “Revolutionary Road,” and the upcoming “Carol,” we seem never to be done with the ‘50s and early ‘60s. Why does this nostalgia for a recent past have us in its grip? After all, the ‘50s and early ‘60s weren’t all rosy, not if you were a woman, a racial minority, or Queer.


I think, though, we recognize that life in those pre-digital days was, perhaps, more organic, dare I say more human. Nowadays, tethered to our electronics, perhaps we fear we’re merging with them; or rather, they with us, relentlessly, and possibly against our will. We are rarely alone with our thoughts: our devices track us, our online searches anticipate us, our email and texts arrive all day and demand constant response. In our pre-digital past, we were freer


We were also, by and large, richer, especially here in America. Post-World War Two America experienced economic abundance the likes of which had never before been achieved, sprinkling its benefits across large portions of the population; capitalists, white collar, and unionized blue collar workers alike. With all that spare cash floating around, even the average Jane and Joe aspired “up,” releasing their pent up desire for the good life after the double whammy of the Depression’s deprivations in the 1930s and the death and destruction of the Second World War in the ‘40s. People bought houses with back yards and with separate rooms for the kids. They bought flamboyant cars, TVs, and closets full of up to date, mass produced clothes. Frankly, post-war America was fun! And we looked great in those fabulous clothes.


So what of crime and mystery stories like CRIMINAL GOLD set in that warmly recalled time? Remember, the mid-20th century was the Golden Age of noir, when popular culture wasn’t shy about exploring the dark side of post-World War Two confidence in the “American Dream” of a car in every garage, a steak on every table, and a wife in every kitchen. Noir expressed the awareness hiding deep in the mind that all was not quite right, that the shiny surface of the good life can hide a festering core of injustice, corruption, and numbing conformity. Post-war noir, in movies and books, demanded that we face facts, even when those facts were presented in the guise of juicy fiction. And noir was where the hero, or more precisely the anti-hero—troubled, outraged, morally ambiguous—acted on our behalf, taking on the Law that kept us in line, the politicians who stole our cash and votes, the mobsters who corrupted our neighborhood businesses. And all the anti-hero had to show for it was a black eye or a bullet to the gut.


And still, we can’t get enough of the ‘50s and early ‘60s. Maybe it’s the lure of the anti-hero’s outlaw bravery. Maybe it’s the cars. Or the clothes. Maybe we’re nostalgic for those days before we were wired to everything and everyone, before our electronic devices threatened to become inseparable with our minds and bodies. Maybe we long to be fully human—and only human—again.
Posted by Barbara Winkes at 3:50 AM