Welcome to Wednesday Women and Yvonne Heidt's Sisters of Spirits universe! In order to enter the giveaway, for the chance to win an ebook of Book 1, you know what to do: Leave a comment here on the blog, together with your contact info (email is best, in case you are the lucky one) Ends next Tuesday, noon EST as usual.
Thank you, Yvonne, for bringing the Sisters of Spirits to the table!

Next week, writing due Wodke Hawkinson will tell all about their leading lady in peril, but for now, let Yvonne introduce you to the world of the Sisters of Spirits Paranormal Society: 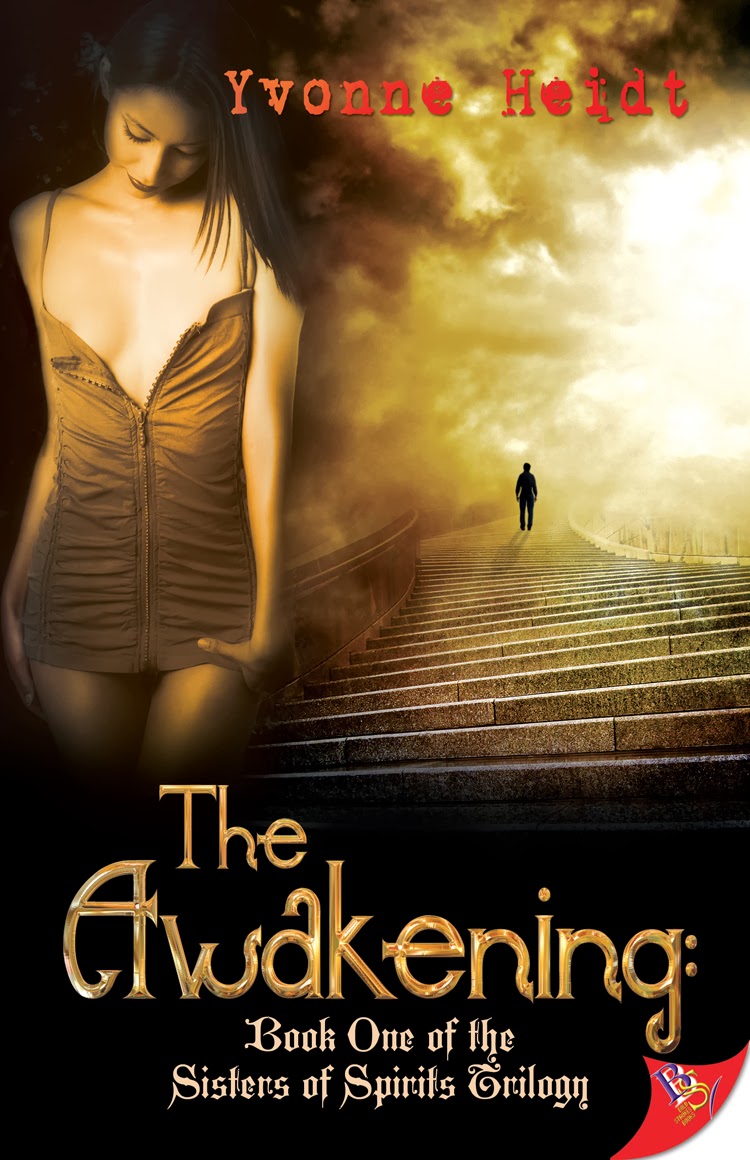 First of all, I’d like to thank Barbara Winkes for the opportunity to guest blog here on Wednesday’s Women.

I’d like to take this time to introduce the women in my Sisters of Spirits Trilogy - a kick ass group of psychically gifted women who met when they were eleven years old. As adults, they created a business featuring each of their strengths – along with the Sisters of Spirits Paranormal Society, dedicated to help others understand what they can’t see, and find the truth behind their hauntings.

The Awakening: Book One, is Sunny’s story.

Sunny Skye, a psychic medium, is the head investigator and founder of Sisters of Spirits. She is excellent at finding ghosts but finds it difficult to cope in the real world. When she meets Jordan, she is instantly attracted and completely unnerved by the personal demons she carries around with her.

Street tough Jordan Lawson molded herself into what she thinks an excellent cop should be. She trusts only two things: facts and herself. She believes only in the evil that mankind commits and she certainly doesn't believe in ghosts, even when confronted by one.

When spiritualism and jaded skepticism collide, who backs down first? 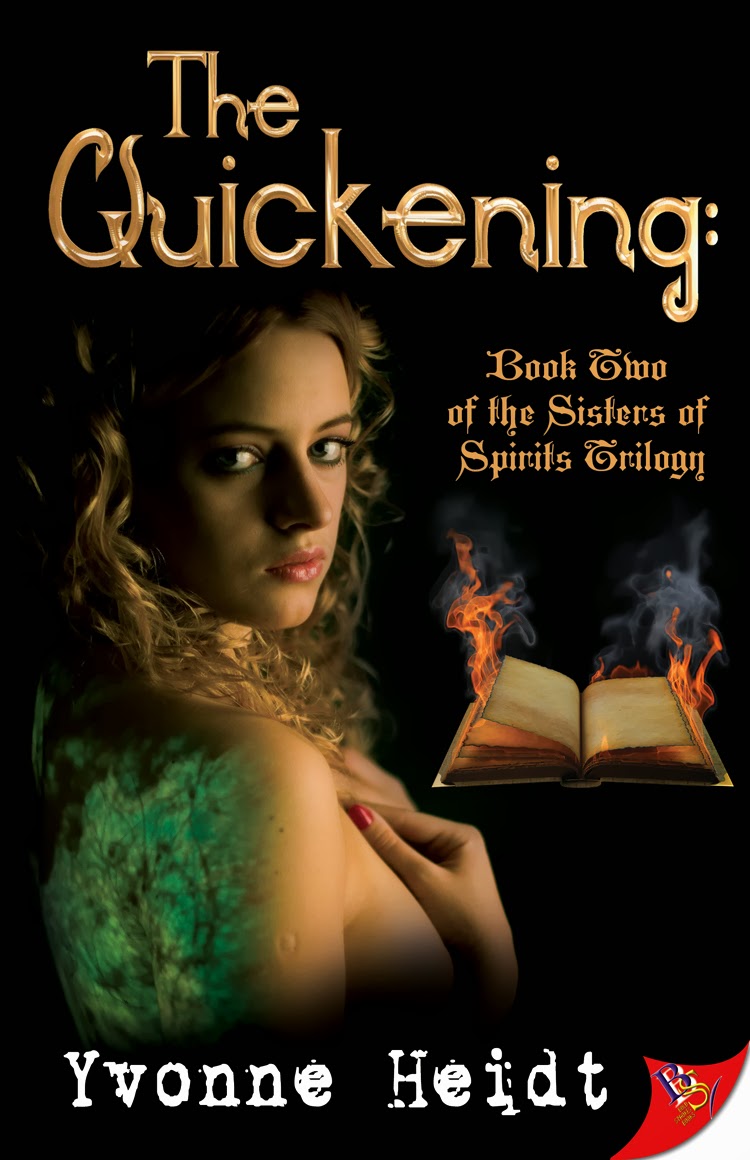 But really, Sunny, Tiffany, and Shade’s story begins fifteen years ago in The Awakening…

Sunny Skye waited on the wide front porch, dancing nervously from foot to foot and impatiently brushing wild curls out of her eyes. She checked the watch she’d received for her eleventh birthday the week before, and tapped the crystal. “They’re late!”
She had been looking forward to this weekend for months. Her father had put together a film crew and invited two additional girls they had picked out of twenty case files to take part in a documentary he was shooting about psychic children. Special kids with extraordinary abilities. Her mother, also gifted, was going to be in it as well. Sunny was beside herself with excitement. She wanted to spend time with other kids who wouldn’t think she was crazy whenever she started talking to someone they couldn’t see.
A dark sedan pulled into the driveway. “Never mind,” she called over her shoulder before running down the stairs.
The rear passenger door opened, and Sunny saw a small girl with red hair pulled into a long ponytail. She was huddled against the backseat and looked as if she might cry. A woman, whom Sunny assumed was the girl’s mother, got out of the car, walked past her, and up to the house, not bothering to take the girl with her.
“Don’t be scared,” Sunny said and held out a hand to help her out. “I’m Sunny, and I’m so happy that you could make it.”
“My name is Tiffany Curran. I don’t like to touch people.”
“Oh,” Sunny said. “That’s right. I forgot.” She stepped back from the car to let Tiffany out. “My dad says that you have psychometric abilities. That means you can read people’s minds by touching them, right?”
“Sometimes. And when I touch things, I sometimes see what happened there. Like walls and stuff.”
“Place memory? That’s cool!”
“What do you do?”
Sunny smiled. “I’m an empath and I can hear and talk with ghosts.”
Tiffany’s light blue eyes widened. “Do you see them?”
“Not with my eyes. I see them here, in my mind.” Tiffany was staring at her with her mouth open. “What?” Sunny asked.
“Your eyes are two different colors.”
“Mom says they were both blue when I was born, and six months later, one of them turned green. Some people think they’re creepy.”
“I think they’re beautiful.” Tiffany smiled shyly, flashing two small dimples.
Before Sunny could politely thank her for the compliment, a door slammed behind them. She felt Tiffany startle at the sight of the last girl to arrive. Taller than Sunny, she was dressed in black clothes that hung off her slender frame. The girl glared in their direction from under spiky hair, her dark eyes framed with heavy black liner. She sneered at them then defiantly took a drag off her cigarette before flicking it into the street.
“Don’t ever call me Lacey.”
Sunny felt a flash of uncertainty at the anger she heard in her voice but remembered her own manners. “Well, what would you like us to call you?”
“Shade.”
Tiffany took a step behind Sunny. “What do you do?”
“Necromancer. I see dead people.”
“For reals?” Tiffany’s voice squeaked.
Shade laughed. “That line never gets old.”
Tiffany looked confused so Sunny explained. “A necromancer can speak to the dead and interact with their shades.” Sunny smiled. “Oh, I get your name now, clever.”
“What’s a shade?” asked Tiffany.
“Invisible zombies.” Shade curled her fingers into claws and moaned dramatically.
Tiffany gave a little squeak and ducked behind Sunny again. Sunny continued to grin, deciding she liked the angry girl despite the dark energy that seemed to be hanging around her. “It’s just another name for a ghost.”
The van behind Shade peeled away with a screech of tires and sped down the street. Sunny felt a sharp jab of hurt emanate from Shade that didn’t match the angry scowl on her face. Sunny’s power of empathy continued to be a mystery to her since she didn’t fully understand how it was she could feel what others did. She hated it when their emotions didn’t match their words or body language. Sunny went with her instinct and stepped closer to Shade.
“Why didn’t your mother stay?” Tiffany asked.
“She doesn’t care about a stupid movie. She’s just happy to get rid of me for the weekend.”
“It’s not a movie. It’s a documentary about special kids who have psychic abilities,” Sunny said.
“Whatever.” Shade turned away from her and wiped at her face. “It’s stupid.”
“My mother says I’m cursed and it’s the devil inside me.” Tiffany blushed and stared at her feet, her hands in her pockets.
“What?” Sunny was shocked. “They are gifts, not curses.” She felt instantly protective of Tiffany and shot an angry look at the woman talking with Sunny’s parents.
“Oh.” Tiffany waved a hand. “That’s not my mother; it’s my aunt Darleen. We didn’t tell her we were coming. She flat-out refused when she got the invitation, so we lied and said we were going to Portland for the weekend.
Shade chuckled and crossed her skinny arms. “This might not suck.”

Tiffany’s story picks up in Book Two: The Quickening.

Tiffany Curran has the ability to read places and people by touch, and although it’s a gift she uses to help people, it’s also a curse that prevents her from having much human contact. She tries to keep life simple, but that all changes when Katerina Volchosky calls in the Sisters of Spirits paranormal team for help.

Kat is tired of reporting about violence in the city and vows this story is her last. She is hoping that S.O.S. can connect with a serial killer’s victims to help provide clues. When she meets Tiffany, she dreams of a promise made centuries ago to a flame-haired priestess.

Ancient whispers of curses and witches haunt Tiffany’s nightmares, and the closer she and Kat get to the murderer, the louder the whispers get. Worse, Tiffany has a horrific suspicion she might know who the killer is.


Ghosts, Witches, Demons, they’re all in a day’s work for Tiffany but when she meets Kat, life takes on another dimension altogether.


Since Barb has generously given me this time to promote The Quickening: Book Two in the SOS series, I’d like to give away an electronic copy of, Book One: The Awakening!


It is my hope that after you fall in love with the characters like I (and so many others) did, you’ll want to continue the journey with me as the sisters battle ghosts, test their boundaries, and fall in love.


If you’d like to know more about my books, including my award-winning Sometime Yesterday, here are my links. I love to interact with my readers!


All books are available in any format on my Bold Strokes Books Author page: http://www.boldstrokesbooks.com/Author-Yvonne-Heidt.html


Always a pleasure to play with Barb :)


Thanks for stopping by and don’t forget to leave a comment for a chance to win!